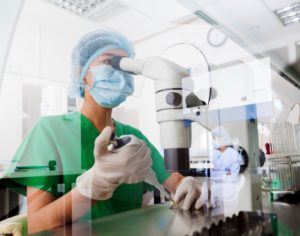 Researchers from the Center for Genomic Regulation (CGR) have found a protein which guides stem cells that develop into specialized heart muscles. The researchers believe their findings can better help reveal underlying causes of heart defects. The findings may also help control stem cells in the lab to grow cellular repair kits for those with damaged hearts.

The protein – Mel18 – is responsible for regulating a piece of cellular machinery that applies temporary silencers to the DNA in developing cells.

Research team leader Dr. Luciano Di Croce said, “Mel18 is highly expressed in embryonic stem cells. During differentiation its expression goes down, while those of its brothers goes up. Interestingly this occurs in a cell-specific manner, which means each brother seems to be responsible for the differentiation of a set of cell types. Mel18 remains high in cardiac cells, while it is not really expressed in neuronal cell precursors, for example. Although we have not looked in to it with great detail, it is likely that mis-expression of Mel18 in cardiac cells might be responsible for heart defects or pathologies.”

The team conducted experiments on stem cells in cultures with genetic sequencing techniques to uncover that the protein Mel18 binds with key genes and regulates their transcription. Mesoderm cells – a layer in the embryo which develops in all muscles and red blood cells – with low levels of the protein became blocked so they could not develop into functioning heart muscle cells.

Their findings suggest low levels of the protein Mel18 is the reason for certain heart defects. In mice models, mice with low levels of the protein developed normal heart muscles but died shortly after birth. Dr. Di Croce added, “This needs to be investigated further. It could be that some of Mel18’s brothers can compensate for Mel18 deficiency during early development.”

The findings were published in Cell Stem Cell.