Home » Men's Health » Is soy milk bad for men? What are the dangers of soy milk? 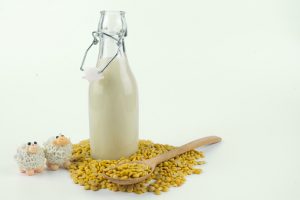 Soy-based products like tofu, miso, tempeh, and soy milk are go-to items of choice for vegans and vegetarians as a means of getting their protein. Soy milk is also used frequently by people who are lactose intolerant. Soy milk is as nutritious—if not more so—than common cow’s milk.

In recent years, however, there has been controversy surrounding this beloved milk substitute, as some men who have incorporated soy milk and other soy-based products heavily into their daily diet have experienced negative side effects as a result.

What are the health benefits of soy milk?

Is soy milk good for you? Well, that’s a complicated question.

Soy is a legume that grows in a pod like other beans. It is an excellent source of protein and other vitamins and minerals—that’s why it has become so popular. The following are just a few of the nutrients you would get from simply drinking one cup of soy milk:

Soy milk is also low in saturated fats, calories, and cholesterol. It is considered a good reducer of inflammation and it may protect the heart and kidneys from disease. Research has even found that soy milk can lower the risk of developing diabetes. There could also be some sex-specific benefits in men, including lowered blood pressure and cholesterol, decreased risk of cardiovascular disease, and protection against prostate cancer.

Much of the health benefits are attributed to the isoflavones in soy, specifically genistein and daidzein.


What are the negative effects of soy milk?

Although there are a lot of benefits of soy milk, the drawbacks may make you double think this beverage. The debate of soy milk danger stems from researchers who say that the aforementioned isoflavones, often praised as being the main contributors to men’s health, are doing more harm than good. Both genistein and daidzein have been shown to act very similarly to that of estrogen: the common female hormone responsible for proper female development and menstruation. Specifically, the substances found in soy milk are known as phytoestrogens, which are estrogens that are produced by plants. The main issue that arises is their interaction with male hormones, causing side effects such as:

While men do inherently create some amount of estrogen, it is often balanced accordingly, ensuring there is a proper ratio of estrogen to testosterone in the male body. Researchers have pinpointed daidzein as being the specific cause of these side effects.

Soy itself may have harmful side effects on the brain, as a study conducted by researchers from Loughborough University in England found that people in their late 60s and others who consumed large amounts of tofu had a higher risk of developing dementia and memory impairment when compared to those who only ate a moderate amount.

A growing concern is mothers choosing to feed their babies soy milk or soy-based formula. It is estimated that 35 percent of bottle-fed babies in the United States receive at least some of their protein from soy. This issue has raised the attention of the American Academy of Pediatrics (AAP), and they are currently taking steps to change this by recommending that all infants who cannot breastfeed be given cow’s milk formula as the preferred alternative, and only be given soy formula when medically necessary.

The concern in infants arises from previous studies in mice who have been raised on enough genistein to make their blood levels comparable to those of human infants fed soy formula. What they found was shrinkage of the thalamus gland, a key part of the immune system. It’s not clear if infants suffer the same effects as seen in this study, but it proved that soy based products do influence bodily processes in some way.

If you are currently consuming large amounts of soy in your diet and are concerned about the possible negative effects, it may be advisable to speak to a doctor or nutritionist on the subject. If you are male and eat excessive amounts of soy—and see the side effects mentioned—seek medical attention right away and stop consuming soy products until you are certain of your symptoms. Soy may be commonly used in products that you are not aware of, so it is important to look at every food label before consumption.