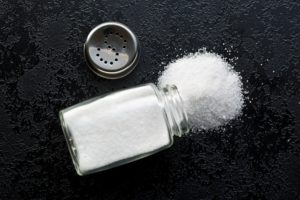 Dairy, gluten, and a high fiber diet usually get the blame for uncomfortable or painful bloating. But a recent study is showing there might be another more likely culprit: sodium.

Sodium, or salt, is loaded into ultra-processed foods to add both flavor and shelf-life. And although it’s unlikely you taste it, it’s most certainly there: processed foods are the most significant source of salt in the American diet. Some doctors suggest that simply avoiding processed foods while maintaining salt use for home cooking and seasoning would move people well under the daily recommended sodium intake of 2300 mg per day (about one teaspoon.)

It seems like salt, however, is not just bad for your heart; it may be bad for your gut too. The study, conducted by researchers at the John Hopkins Bloomberg School of Public Health, found that eating a lot of salt can increase bloating and discomfort in the stomach.

Although the researchers were unable to distinguish precisely how salt impacts bloating, it is believed that the connection lies in fluid retention. Salt intake promotes water retention, potentially making digestion less efficient and leading to gas and bloating. Studies on mice have also shown that salt can alter gut bacteria populations.

Researchers looked at findings from a trial that ran from 1998-1999. It looked at people following a DASH diet—which is high in fiber, fruits, veggies, and nuts—which was compared to a low-fiber diet to see its effects on heart health. This time around, they wanted to look at how such diets impacted bloating.

It’s possible, of course, that you may experience bloating because your body just doesn’t agree with certain foods (like lactose). Others may have a condition like Crohn’s or celiac disease, in which case a doctor should be consulted for treatment options. But if you regularly experience gas and bloating without a defined condition, you can try these tactics in addition to lowering salt intake: