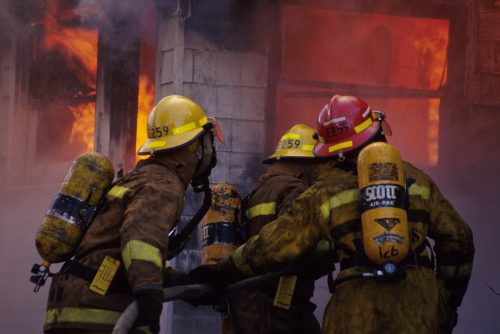 The researchers looked at medical records of over 8,000 firefighters who worked at the World Trade Center and found that over the course of 13.5 years, roughly 1,900 respondents developed severe sinus problems and 479 underwent surgery.

The sinus problem, known as chronic rhinosinusitis (CRS), causes blockages and drips, as well as facial pain, and negatively impacts the ability to smell. Many patients simply obtain relief from medications and do not require surgery.
Firefighters who responded to the attacks within the first two days had a 45 percent higher risk of requiring surgery for CRS, compared to those who went on the third day when rain reduced air pollution.

Firefighters who worked on the site for six months or more were 48 percent more likely to require CRS surgery than those who were there for only a month’s time.

Firefighters who required CRS surgery were also found to have higher count of the immune system’s white blood cells even prior to working at the World Trade Center site.

Senior author Dr. Michael Weiden said, “Approximately five years after the towers collapsed, we began seeing more and more sinusitis and that has continued unabated to this day. Something that happened 14 years ago still has direct medical consequences in firefighters whose immune system was turned on in a way that prevents it from being shut off.”

Weiden explained that those who did not respond well to CRS medication were “different immunologically before 9/11 than those who did.” He suggested that treating patients who had high levels of the immune system’s white blood cells prior to September 11 would increase the success rates of the medication and lower the risk of undergoing the surgery.