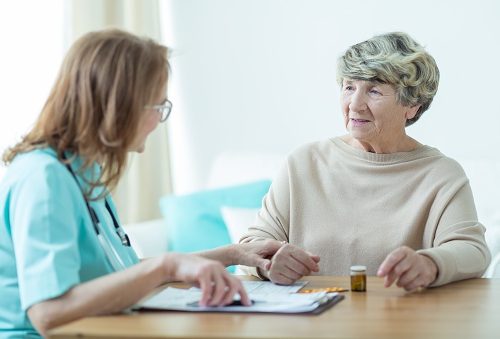 Lead researcher Dr. Dima Qato said, “Alongside the growing use of multiple medications, there is also a hidden, and increasing, risk of potentially deadly drug interactions in older adults.”

Researchers suggest that seniors should always speak to their doctors or pharmacists prior to including additional medications and supplements into their routine in order to reduce the risk of unsafe drug interactions and other complications. “A medication or supplement may be safe and beneficial when you use it alone, but when you mix it with other medications or supplements, it can be very dangerous,” Qato added.
The research team interviewed over 2,300 seniors about their medication/supplement use in 2005, and 2,200 seniors were interviewed in 2011. The rise in seniors taking at least five prescription medications rose from 30 percent to 36 percent, and those taking over five medications rose from 53 percent to 67 percent. Over-the-counter medication use dropped slightly, but the use of supplements increased from 52 percent to 64 percent. Multivitamins and mineral supplements were the most common supplements taken among seniors.

Some researchers criticize the study as they feel that simply knowing how many medications and supplements are taken doesn’t fully reveal the potential hazards which patients are exposed to. Dr. Michael Steinman, author of an accompanying journal editorial, wrote, “We need to identify what the problems are and devise ways to help people avoid these problems.”

Other research has found that doctors often don’t ask their patients about other supplements or medications they may be on and base their prescriptions only on what they have previously prescribed and what patients have been known to take. Furthermore, patients may be fearful to tell their doctors that they are on supplements.

Researcher of the alternative study Judy Jou added, “Not telling primary care providers about using complementary and alternative medicines can be dangerous, especially if the type being used creates adverse interactions with any medical treatments that a patient might be undergoing concurrently.” The researchers found patients were more unlikely to tell their doctors about alternative therapy treatments as well.