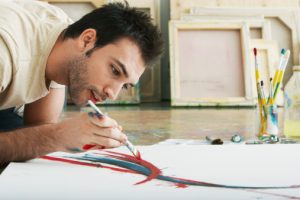 To be a creative person, does one have to be a bit neurotic? And by the same logic, do all neurotics have a creative streak in them? Take Nikola Tesla for example; despite numerous neurotic symptoms, he was a genius. His genius did not stop him from obsessing so much over the number three that he even created rituals around it. His fear of disease, his aversion to overweight women and his compulsion with counting did also not stop him from being the greatest inventor of the modern world. No wonder he is popularly referred to as the ‘mad scientist.’

To answer questions similar to the one that started this article, psychologists have done an in-depth research study on why neurotic emotions and creativity go hand-in-hand.

The outcome of their research is presented in a paper in Trends in Cognitive Sciences Opinion. The authors present the theory that, in neuroticism, the part of the brain responsible for self-generated thought is highly active, resulting in the creativity and misery of neurotic persons.

In personality tests, people who score high on neuroticism scales are more likely to have negative thoughts and feelings of all types, struggle to cope with dangerous jobs, and experience psychiatric disorders within their lifetime.

In the 1970s Britain’s popular psychologist Jeffery Gray proposed that the reason for people becoming neurotic is because they are more sensitive to threat than normal individuals. He confirmed this theory by giving anti-anxiety drugs to rat. The drugs relaxed the rats and made them less sensitive to cues of punishment.

While there is some merit to Gray’s theory, it didn’t account for the full spectrum of neuroticism. In fact, according to the lead author of the paper, Adam Perkins, there are many high scoring neurotics who often feel unhappy in situations where there is no threat at all. Also, there is growing evidence that show high neuroticism scores are positively correlated with overthinking and creativity. It does not make sense that increased fear of threat will help one come up with new ideas.

When co-author, Jonathan Smallwood, a psychologist at the University of York, described a key study about the way the brain functions during negative thoughts, Perkins found what he was looking for. The study, which used MRI scanner results, showed that when individuals spontaneously have particularly negative thoughts (spontaneous negative thinking is a common symptom of neuroticism) their medial prefrontal cortex (the area associated with conscious perception of threat) displayed greater activity. Perkins realized that individual differences in the activity of these brain circuits that govern self-generated thought could be a causal explanation for neuroticism.

Perkins theorized that if people happen to have a lot of negative self-generated thoughts because of increased spontaneous activity in the parts of the brain that govern conscious perception of threat, and if these people also panic sooner than average people, then that means they can experience intense negative emotions even when there’s no threat present. This led him to believe that for specific neural reasons, high scorers on neuroticism tests have an overactive imagination, which doubles up as a built-in threat generator.

The overthinking hypothesis also explains the positives of neuroticism. The creativity may simply be the result of dwelling on problems far longer than average people.

The team hopes their theory will help downplay the neurotic-threat theory and point more toward the positive aspect of neuroticism. They also hope the straightforward unifying framework of linking the creative aspects of neuroticism with its emotional aspects will prompt further research.