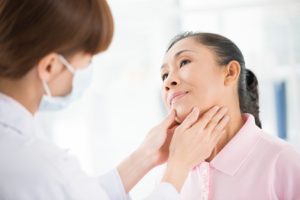 A recent survey shows that many people with thyroid disease are unaware they have a thyroid problem. This is quite disconcerting as a hyperactive or a hypoactive (underactive) thyroid can cause a many health problems, including mood changes, infertility, weight gain or loss, and even skin conditions. In fact, in infants and children, an underactive thyroid can be fatal, which is why neonatal testing for thyroid deficiency is a must.

Thyroid disease affects more than 10% of the U.S. population, but in spite of the prevalence of thyroid disease and its harsh side effects, scientists have not been able to come up with an answer for a very basic question, namely, what turns on the thyroid? Till now that is.

In a recent study, the answer to that question was found in the gland itself. The team of researchers who made this important discovery believe their finding will not help understand the gland better, but also open up new doors for treating thyroid problems. The team also believes their finding will help diagnose and treat other glands that operate in a similar fashion. The full details of the study can be found in the latest issue of the Journal of Biological Chemistry.
According to the leader of the study, Torsten Schöneberg of the University of Leipzig in Germany, who led the study, it was curious that the legitimate activator hormone (Thyroid stimulating hormone or TSH for short), autoantibodies and mutations all were able to provoke thyroid hormone production. So his team set out to identify a common thread among them.

They discovered a small amino acid sequence, which were about 10 amino acids long within the TSH receptor protein. The team proved this sequence of amino acids helps activate the TSH when it binds with hormones or autoantibodies. Because of its length, they named this sequence P10.

The team hopes that now that researchers know that TSH can essentially flip its own switch, further studies can use this information to design drugs to control the switch. “For example, in a condition like Graves’ disease, hyperthyroidism is caused by autoantibodies directed against the TSH receptor. These autoantibodies stimulate the thyroid in an uncontrolled fashion and cause hyper-activity. However, thanks to the new findings, scientists can develop specific small-molecule drugs that can help prevent these autoantibodies from stimulating the thyroid.