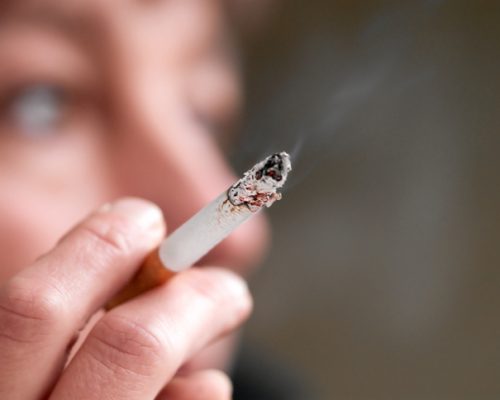 Schizophrenia is linked to an increased intensity of tobacco smoking, with low smoking cessation rates among schizophrenic patients, compared to the general population. Researcher and lead author of the study Stéphane Potvin said, “Smoking is a real problem for people with schizophrenia. Their health and life expectancy are often undermined by this addiction, whose brain mechanisms were until now largely unknown.”

Potvin added, “These observations suggest that smoking has a greater rewarding effect in schizophrenia smokers. This corroborates the hypothesis already formulated of their increased vulnerability to this addiction, but also demonstrates the great difficulty for them when it comes to quitting smoking.”

Smoking prevalence is high among schizophrenics, and cessation rates are low. This puts schizophrenics at a higher risk for heart disease and other complications related to smoking. Potvin concluded, “It is necessary to explore avenues that will help people in their efforts to free themselves from smoking. That is why we want to continue our research into whether this activation of the ventro-medial prefrontal cortex (vmPFC) is caused by the disease itself or by the effects of antipsychotics.”

Instead, in schizophrenics, the increase in the levels of nicotine receptors was associated with lower levels of social withdrawal, blunted emotional and motivational responses, and better cognitive function.

Nicotine imitates acetylcholine, a natural chemical messenger that stimulates nicotine receptors in the brain. In the study, the researchers compared the levels of nicotinic acetylcholine receptors (β2*-nAChRs) in schizophrenia patients (both smokers and non-smokers) and healthy controls.

First author Dr. Irina Esterlis explained, “We found a blunted effect of tobacco smoking on the β2*-nAChR system in individuals with schizophrenia. Furthermore, we found that lower receptor availability of β2*-nAChRs in smokers with schizophrenia is associated with worse negative symptoms and worse performance on tests of executive function.”

“The data seem to suggest that smoking might produce some clinical benefits for some patients by increasing the availability of receptor targets for nicotine in the brain. This finding adds to evidence that brain nicotine-related signaling might play a role for new medications developed to treat schizophrenia,” added Dr. John Krystal, editor of Biological Psychiatry.