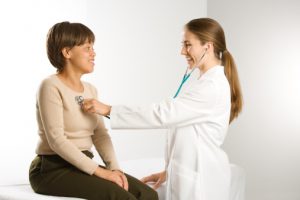 Although the risk of heart disease and other cardiovascular problems is known to increase after menopause, a new study suggests the risk may begin to rise even before the menopause onset. The elevated heart risk after menopause has to do with decreasing levels of estrogen.

Senior author Dr. Mark DeBoer said, “These risk factors related to heart disease and stroke appear to worsen rapidly in the years leading up to menopause, and during the postmenopausal period, they progress less rapidly.”

Previously, the risk of heart disease and stroke in women was believed to be “catching up” with men’s heart risk after menopause. The new findings suggest that the heart risk factors may begin way before a woman’s last menstrual cycle. The researchers note that the real “danger zone” is before and during menopause. This transition was seen to take place quicker and earlier in black women.
The researchers analyzed the medical records of nearly 1,500 women enrolled in a national study. The researchers looked specifically at five risk factors for heart disease and stroke, namely, a large waistline, high blood fat levels (triglycerides), low levels of “good” HDL cholesterol, high blood sugar, and high blood pressure.

The researchers noticed a rapid increase in these risk factors during the last years of premenopause and during the perimenopause transition.

The findings suggest that doctors should be talking about heart health with their female patients even prior to menopause to ensure they take control of their risk factors for heart disease and stroke.