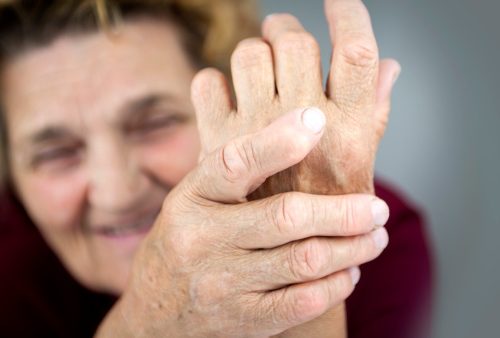 Rheumatoid arthritis is tied to mood disorder symptoms and cognitive impairment. The findings were uncovered through a thorough review of published research, which revealed that rheumatoid arthritis (RA) not only affects the joints and causes pain, but it can also affect the central nervous system, spine, and brain as well.

Lead author Dr. Andrei Joaquim said, “Neuropsychiatric manifestations — especially mood disorders and headache — are frequently observed in RA. It is of paramount importance for neurologists and rheumatologists to understand the nuances of neurological symptoms in RA patients for a proper diagnosis and an adequate treatment.”

Rheumatoid arthritis patients were also more likely to suffer cognitive impairment, compared to the general population. This was most apparent in visual-spatial perception and planning. The researchers noted that outside factors could contribute to this impairment such as low education, low income, as well as increased use of oral steroids and higher rates of cardiovascular disease.

In many cases, it is unclear whether mood disorder symptoms and cognitive impairment are brought on by rheumatoid arthritis itself or by other contributing factors. Further research is required to determine the underlying cause.

There are numerous options to treat rheumatoid arthritis, depending on disease severity and individual condition. Some treatments involve medications to ease symptoms and slow down or stop disease progression. Some of these medications include corticosteroids, disease-modifying antirheumatic drugs (DMARD), biologics, and JAK inhibitors.

Surgery, too, can be utilized to help treat rheumatoid arthritis depending on damage and whether this damage affects daily activities. Joint replacement surgery is a common surgery in rheumatoid arthritis, with hip and knee replacements being the most common. This type of surgery helps improve function and relieve pain in the damaged joints.

In order to determine which form of rheumatoid arthritis treatment is best for you, consult your doctor.