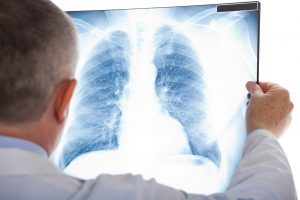 Interstitial lung disease (ILD) is a pulmonary condition characterized by the progressive and irreversible scarring of lung tissue. ILD is the most serious and common lung disease among rheumatoid arthritis patients. Symptoms may take years to appear, but once they do appear the risk of mortality is already quite high. Symptoms of ILD include breathlessness, dry cough, wheezing, chest pain, and the clubbing of fingernails.

ILD isn’t the only lung disease which rheumatoid arthritis is associated with. In fact, it is also linked to pulmonary fibrosis, nodules, pleurisy, and effusions.

As mentioned, treatment for rheumatoid arthritis can increase the risk of lung diseases, too. Biologic agents have been found to worsen outcomes in patients with already diagnosed ILD, but on the other hand, some may improve outcomes. Specifically, the anti-TNF (anti-tumor necrosis factor) drugs, such as etanercept, infliximab, and adalimumab, have all been reported to worsen ILD in some cases, and many doctors are wary of using these agents in patients who are already breathless as a result of this. On the other hand, anti-B cell drug rituximab is associated with stabilization and even improvement in some patients with ILD.

Other drugs that may increase the risk of lung disease in rheumatoid arthritis include steroids and azathioprine.

Some prevention tips against lung disease in rheumatoid arthritis include smoking cessation and regular checkups, as ILD may progress for many years without symptoms and when symptoms appear it may be too late. Regular lung checkups can help spot any issues early on so treatment can begin right away.

Rheumatoid arthritis can cause hearing loss due to multiple factors, new study