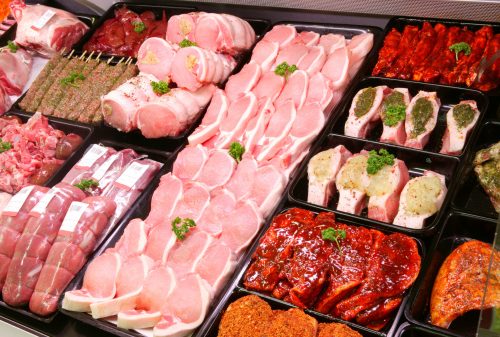 A new study reveals how contaminated food could be an important source of human exposure to Klebsiella Pneumoniae. The results of the study have enough evidence that suggest this bacteria should be added to the list of risky disease causing bacteria in food products.

Public health surveillance officials usually discount bacteria that do not cause immediate illness. The current trend is to focus on well-known pathogens such as Salmonella and Campylobacter where the link between food consumption and illness is more evident.

But with the Klebsiella – meat contamination results, discounting bacteria that do not cause immediate illnesses might not be a good idea.

In the study the research team from the Antibiotic Resistance Action Center at George Washington University, looked for the bacterium in 508 packages of pork, chicken, and turkey bought in supermarkets of a specific locality (Flagstaff, Arizona) over 10 months. They also searched for the organism in 1,728 samples of blood or urine taken from Flagstaff hospital patients during the same period.

According to the lead author, Lance Price, this study is the first one to indicate contaminated meat as one of the sources of the potentially dangerous Klebsiella.

People infected with Klebsiella, typically have a sudden onset of high fever and chills; flulike symptoms; and productive cough with a copious amount of thick, tenacious sputum that is sometimes tinged with blood. Untreated the infection can spread and cause abscess formation, cavitation, empyema, pleural adhesions, and complications like meningitis.

Klebsiella bacteria are normally found in the human intestines where they do not cause disease. So far, the medical community was of the opinion that Klebsiella infections commonly occur in healthcare settings where sick patients (with a weakened immune system) who are receiving treatment for other conditions, get infected, according to the Centers for Disease Control. Thanks to their strong immunity, healthy people, as a rule, do not usually get Klebsiella infections.

To get a Klebsiella infection, a person must be exposed to the bacteria. In healthcare settings, Klebsiella bacteria can be spread through person-to-person contact or less commonly, by contamination of the environment where medical tools and conditions may allow Klebsiella to enter the body. The new study shows that people can get infected with contaminated food, too. Especially meat products.

The study also linked that the antibiotic resistance of these organisms to the influence of antibiotics that are given to meat animals. The study established how the bacteria did not get drug resistant in the medical center, but much before that where they became resistant depending on the degree of antibiotic use on the farms where animals were raised.