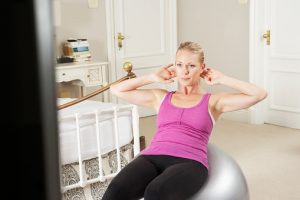 A recent study revealed that home fitness DVDs may contain a hidden curse in the form of negative imagery and demotivating language.

The big problem surrounding the largely unregulated $250 million a year Fitness DVDs industry is that there is neither any scientific evidence about their safety and effectiveness nor is there any accuracy about the information contained in them.

A detailed analytical study led by Brad Cardinal, a kinesiology professor in the College of Public Health and Human Sciences at Oregon State University (OSU) showed that the imagery in 10 commercially popular fitness videos may be supporting and reinforcing hyper-sexualized and unrealistic body images.

The findings of the study which is co-authored by Professor Marita K. Cardinal of Western Oregon University and OSU graduate students Rosalee L. Locklear, Brian Kuo, Kim A. Rogers and Katelyn E. Comfort; are published in the latest issue of Sociology of Sport Journal.

During the study, the researchers analyzed 10 popular, instructor-led fitness DVDs, taking into consideration both the imagery as well as the motivational language used by the instructors. The researchers observed that most of the instructors and models were slim, white females, typically wearing revealing attire. The research team believes that such imagery sends a subtle message about what people who are fit should look like. Moreover it skews the viewers’ goal towards physical appearance rather than improved health.

The researchers also noticed that out of every seven motivational statements on the DVDs, at least one was actually a demotivating statement. These statements included phrases like “you better be sweating,” “say hello to your sexy six-pack” and “you should be dying right now.”
Such aural cues encourage social comparison, and don’t take into account individual differences in health or fitness.

These messages could potentially harm users who use exercise DVDs as they are uncomfortable in a gym or fitness class setting.

The problem is that while most of these exercise videos are marketed to novice exercisers the movement skills in many of these videos are designed for intermediate or advanced levels of fitness, and as such were more demotivating and discouraging.

By watching these videos users were basically opening their minds to images and messages that could make them feel bad about themselves.

Prof. Cardinal believes that this could reduce the impact of the workout, demotivate the user and thereby cause potential psychological harm

Being a national expert on the benefits of physical activity himself, Prof. Cardinal questions the true value of exercise DVDs when it come to helping people develop and commit to a workout program. What bothers him most are the exaggerated claims through the imagery and the marketing message which basically says. “’do this and you’ll look like me.’ ”

Cardinal urged potential fitness DVD consumers to be reasonable with their expectations. It is important to remember that we all have different body sizes and shapes, and our bodies may respond differently to the exercises being shown.
Prof. Cardinal advises users to be more concerned about doing the exercise routines carefully and regularly, rather than worrying about the results. The results will follow eventually. It is important that one enjoys the exercises and get the health benefits for doing them.

The findings of the study suggest that there is a need to further study commercial fitness DVDs, to determine the effectiveness and safety of the types of exercises and techniques used. The team hopes their current study will open the doors for more research into this growing trend of fitness videos.