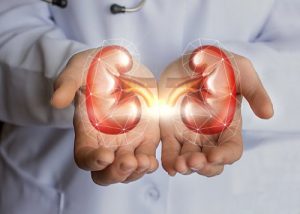 Chronic kidney disease (CKD) rates are on the rise in the global population. The condition is said to affect nearly ten percent of the population over the age of 30, but this number nearly quadruples once the age of 65 is reached. As a result, it is believed that aging is a general risk factor for the development of CKD.

A person’s glomerular filtration rate (GFR) is indicative of their kidney function and can be used to detect potential kidney diseases. In the older generation, the GFR measurement is reduced and is taken as a sign of decreased kidney function and increased risk of CKD.

A new study had emerged, however, with the hypothesis that a lowered GFR was simply part of the natural aging process and not a predictor for disease. The researchers worked to identify the overall prevalence of decreased GFR in the sample population as well as the prevalence of patients with a lowered GFR but without any comorbidities.

The data analyzed was collected as part of census information and another study performed in 2010. Inclusion in the study was obtained via written consent. “A multistage cluster sample composed of 1,253 individuals, representative of 1,249,388 inhabitants of São Paulo city aged greater than 60 years in 2010, was analyzed. The participants answered a survey on socio-demographic factors and health, had blood pressure measured and urine and blood samples collected,” write the researchers. This study was the first to identify the population of São Paulo living with a lowered GFR, where before there existed no finite data on the subject.


Participants with Decreased GFR More Likely to Have Hypertension and Diabetes

The results showed an overall prevalence of decreased GFR in 20 percent of the population. In those participants, there was an increased likelihood of cardiovascular disease, diabetes, and hypertension. Of the decreased GFR patients, only 9.5 percent showed no comorbidities or renal damage. These participants tended to be older, more likely to be female, and Caucasian. Ultimately, this sample of the study population with a decreased GFR but without comorbidities represented only 0.7 percent of the total population.

The findings of the study show that a decreased GFR in elderly patients is more often associated with comorbidities, such as cardiovascular disease, diabetes, and hypertension than it is not. and, therefore, The impact that the normal aging process has on decreased GFR is much lower than the other underlying conditions it is associated with.

The researchers believe these results still have high importance, as some of the participants (if a very small number) did show a decreased GFR without any comorbidities. Determining the cause of a patient’s lowered GFR is critical, for physicians to then determine the proper course of treatment. If a patient has a decreased GFR as part of the natural aging process, treating it will not reduce the risk of cardiovascular events or end-stage kidney dysfunction. If the GFR rate is low because there does exist the presence of chronic kidney diseases, then it should be treated immediately.