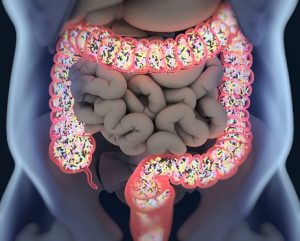 Your body is a diverse network of cells that all work together to create life. However, this would be impossible to do alone, as we harbor millions of bacteria in our intestinal system that help us break down and digest food. Called “probiotics,” these organisms have been found to not only relieve gastrointestinal upset but also relieve symptoms of depression, according to new research.

At some point in our development, humans developed a symbiotic relationship with certain types of bacteria. While it’s easy to assume that all bacteria are harmful, this would be far from the truth. Scientists have coined the term “normal flora” to describe these helpful bugs, and they are found in more places than just the gut:

The study in question found that individuals with irritable bowel syndrome (IBS) were twice as likely to report improvements from their depression when taking a specific probiotic, compared to a placebo group.
“The study provides further evidence of the microbiota environment in the intestines being in direct communication with the brain,” said senior author Dr. Premysl Bercik, an associate professor of medicine at McMaster and a gastroenterologist for Hamilton Health Sciences.

The study involved 44 IBS suffering adults with mild to moderate anxiety or depression. Participants were followed for 10 weeks. Half the subjects took the probiotic Bifidobacterium longum NCC3001 and the other half took a placebo.

Six weeks into the study, 14 out of 22 probiotic-taking subjects displayed decreased depression scores. The placebo group saw only seven of 22 reporting decreases in their depressive symptoms.

Perhaps more significant was the fact that improvements in depression scores were associated with changes in multiple brain areas known to be involved in mood, as seen on fMRI scans.

“The results of this pilot study are very promising but they have to be confirmed in a future, larger scale trial,” said Dr. Maria Pinto Sanchez, first author and McMaster clinical research fellow.