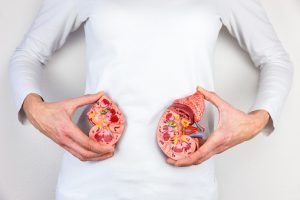 Diabetic kidney disease is very difficult to treat, though a new study from Karolinska Institutet has shown promising results in preventing this disease from worsening.

The disease is also referred to as diabetic kidney failure, and is the biggest reason patients undergo dialysis—sometimes, they may even require kidney transplantation. It is often detected through the leakage of plasma proteins into the urine, as well as through issues in the filtration of waste from the blood and reduced urine production. Patients with diabetic kidney disease have a buildup of lipid droplets in the kidneys, though previous research had not been able to determine the reason for this or whether it accelerated the deterioration of the kidneys.

Using mice models with diabetic kidney disease, researchers discovered a relationship between the buildup of lipids and the severity of the degeneration. With the use of a newly developed drug candidate, the team was able to block the biological response that causes the buildup of lipids, reducing the severity of the degeneration. Through this method, they were also able to create podocytes—cells in the renal filtration system that respond to insulin and prevent further kidney damage. While this method does not reverse existing damage, it does stop the progression of the disease, which may reduce a patient’s need for dialysis or kidney transplant.
While researchers have only seen these positive results in mice, the drug candidate being used has been deemed safe and free of unacceptable side effects, meaning human trials may be in the near future. The team hopes to apply their research to create treatments for other kidney issues besides diabetic kidney disease.