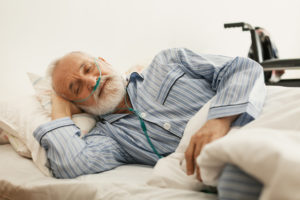 If you’re a little older and struggling with sleep, you’re not alone. As people get older, they sleep less. Older folks tend to wake up earlier and fall asleep later.

But does this signal poor health? It might, according to a new study. Research published in mid-June suggests sleep troubles may play a role in Parkinson’s disease risk.

Basically, you should be awake during daylight hours and asleep when it is dark.

Two people with Parkinson’s that you might be familiar with are Michael J. Fox and the late Muhammed Ali. It is the second most common neurodegenerative disease, and more than 500,000 Americans have received a diagnosis.

Sleep is one of the pillars of good health, and its effects are far-reaching. Certain lifestyle choices/habits can impact sleep quality. Some include viewing bright screens before bed, consuming alcohol or caffeine in the evening, or a sedentary lifestyle.

If you’ve made the lifestyle adjustments associated with good sleep hygiene, like relaxing before bed, avoiding screens and stress, and more, then there are other options to try. Supplementing with melatonin for short periods can be beneficial, as can light therapy.

The researchers noted that they were unable to establish causation or determine whether an impaired circadian rhythm was a symptom or contributor to Parkinson’s disease. Other experts, however, believe that poor sleep is a risk factor.

Identifying sleep troubles early may help prevent Parkinson’s. One way to track your sleep pattern is with wearable technology like a Fitbit. Devices like this monitor sleep duration and quality.

Getting better sleep has the potential to improve health and reduce the risk of several harmful health conditions. Parkinson’s disease might be another to add to the list.