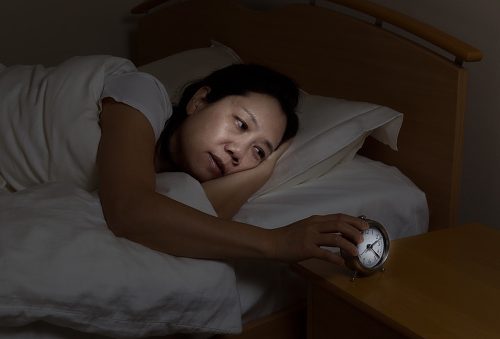 A Chinese study has found that insomnia and poor sleep cause changes to the brain’s white matter, which is the part that forms connections and carries information from different locations in the brain. Researcher Shumei Li explained, “If white matter tracts are impaired, communication between brain regions is disrupted.”

Primary insomnia is a condition in which a person is tossing and turning throughout the night and has difficulty staying asleep. This type of insomnia is not related to another medical condition or does not have a known cause. Side effects of primary insomnia include daytime sleepiness and cognitive impairment. Furthermore, patients with primary insomnia are more likely to suffer depression or anxiety.

The researchers looked at 23 patients with primary insomnia and 30 patients without the condition. The participants completed surveys in order for researchers to determine their mental state and sleep patterns.
The researchers used diffusion tensor imaging (DTI), an MRI technique, to look at the pattern of water movement in the patients’ white matter in the brain to identify any irregularities.

The researchers found that patients with primary insomnia had reduced white matter integrity in several areas of the brain. One of those areas was the thalamus, which regulates consciousness, sleep, and alertness. Another area was the corpus callosum, which bridges the two halves of the brain together.

Li added, “The involvement of the thalamus in the pathology of insomnia is particularly critical, since the thalamus houses important constituents of the body’s biological clock. Our results can potentially provide the evidence about how the lack of sleep may lead to the impairment of white matter related to emotional or cognitive disorders.”

Patients who had more severe primary insomnia or who had it for longer time had greater white matter abnormalities, which could be resulting from the loss of myelin, the protective coating around nerve fibers.

The researchers are still unsure whether treating primary insomnia would help restore lost connections. Li concluded, “This is a very interesting and open question. We are also very interested in knowing whether this damage is irreversible or not if the insomnia gets cleared up. But our current study is still not enough to answer this question.”