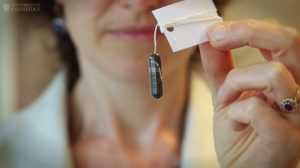 A research team led by Professor Rebecca Fitzgerald at the Medical Research Council Cancer Research Unit at the University of Cambridge has developed a unique sample collector that can help doctors diagnose esophageal cancer – cancer of the gullet – when it’s still in its early, treatable, stage.

The collector is basically a sponge swab (cytosponge) enclosed in a dissolvable pill attached to the end of a string. This unique contraption has the distinct advantage of procuring cells from a wider area in the gullet compared to the current biopsies that take individual point samples.

When swallowed, the pill descends and the outer covering dissolves and exposes the cytosponge. When the sponge is pulled up with the help of the string, it scrapes cells off the walls of the entire length of the esophagus.

Researchers say this is a huge improvement over the standard biopsies that take samples from smaller areas.

Research published in the journal Nature Genetics suggests that the cytosponge can help solve the big problem of variation between biopsies. Understanding the genetic mutations involved in the development of cancer could help physicians and diagnosticians detect the disease earlier.

In Barrett’s esophagus, the cells along the walls of the esophagus begin to change shape and even grow abnormally. These changes happen during acid reflux.

The current method of detecting both Barrett’s esophagus and esophageal cancer, is to look for a proliferation of abnormal cells in a tissue biopsy. This has its limitations as it requires a trained scientist to identify the cellular abnormalities and the area where the sample is taken might not have the cancerous cells. But another part of the esophagus might have the cancerous cells.

Researchers from the University of Cambridge have shown that variations in mutations across the esophagus mean that standard biopsies may miss cells with important mutations. But as the cytosponge comes in contact with a wider area in the gullet, a sample was more likely to pick up key mutations, than a normal biopsy.

When Fitzgerald and her team created a map of mutations in a patient with Barrett’s esophagus, they found a great deal of variation among the cells. Some of the cells might carry an important mutation, but many will not.
“If you’re taking a biopsy, this relies on your hitting the right spot,” said Fitzgerald. “Using the cytosponge appears to remove some of this game of chance.”

Even in areas of Barrett’s esophagus without cancer, the researchers noticed a large number of mutations – on average 12,000 per person (compared to an average of 18,000 mutations within the cancer). Many of these mutations were benign.

So far very little is known about how you go from a pre-cancerous stage to esophageal cancer. But the researchers hope that with the help of the cytosponge, they can get closer to understanding which important mutations tip the condition over from a harmless one into a potentially deadly form.