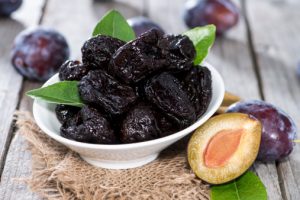 Osteoporosis, bone loss, and fractures due to radiation have been found to be preventable by consuming dried plums (prunes). The study revealed that consuming dried plums may protect against ionizing radiation, which increases oxidative damage in skeletal tissues and leads to an imbalance in bone remodeling.

Millions of seniors worldwide are at risk for osteoporosis – women especially – and as the population continues to age more cases of osteoporosis begin to spike.

Lead researcher Dr. Nancy Turner said, “Bone loss caused by ionizing radiation is a potential health concern for those in occupations or in situations that expose them to radiation. This is relevant to not only astronauts in space, but also cancer patients, those undergoing radiotherapy, radiation workers, and victims of nuclear accidents.”

“The changes in remodeling activity caused by exposure to radiation can lead to impaired skeletal integrity and fragility both in animals and human radiotherapy patients,” Turner added.

Turner explained, “We evaluated different interventions with antioxidant or anti-inflammatory properties, including an antioxidant cocktail, dihydrolipoic acid, ibuprofen, and dried plum, to determine their ability to prevent bone loss and to blunt the expression of genes in marrow cells that lead to the breakdown of bone after irradiation with either gamma rays or simulated space radiation. Bone loss caused by ionizing radiation occurs quite rapidly in rodents. The interventions were evaluated first by using early gene expression markers and then were tested for their ability to prevent radiation-induced bone loss.”

Turner explained that many interventions were tested in order to prevent bone loss and that dried plums were found to be the most successful.

“Dried plums contain biologically active components that may provide effective interventions for loss of structural integrity caused by radiotherapy or unavoidable exposure to space radiation incurred over long-duration spaceflight. From this study, we can conclude that inclusion of dried plums in the diet may prevent the skeletal effects of radiation exposures either in space or here on Earth,” Turner concluded.

Previous findings uncovered that consuming dried plums can help improve bone health and prevent fractures in postmenopausal women and those of all age groups.

Lead researcher Bahram H. Arjmand said, “Over my career, I have tested numerous fruits, including figs, dates, strawberries, and raisins, and none of them come anywhere close to having the effect on bone density that dried plums, or prunes, have. All fruits and vegetables have a positive effect on nutrition, but in terms of bone health, this particular food is exceptional.”

The researchers tested two groups of postmenopausal women where the first group of 55 women was instructed to consume 100 grams of dried plums daily for a year and the second group consumed 100 grams of dried apples. Participants also received 500 milligrams of calcium and 400 UI of vitamin D.

The dried plum group was found to have higher bone mineral density, compared to the dried apple group. Researchers suggest the dried plums lower the rate of bone resorption – the breakdown of bone – which is found to be faster in older adults, leading to greater bone loss.

The researchers state that postmenopausal women are at the greatest risk of bone loss within the first five to seven years after menopause, so early intervention for bone loss prevention is essential to avoid fractures and osteoporosis. Arjmand added, “Don’t wait until you get a fracture or you are diagnosed with osteoporosis and have to have prescribed medicine. Do something meaningful and practical beforehand. People could start eating two to three dried plums per day and increase gradually to perhaps six to 10 per day. Prunes can be eaten in all forms and can be included in a variety of recipes.”

Eat this for stronger bones