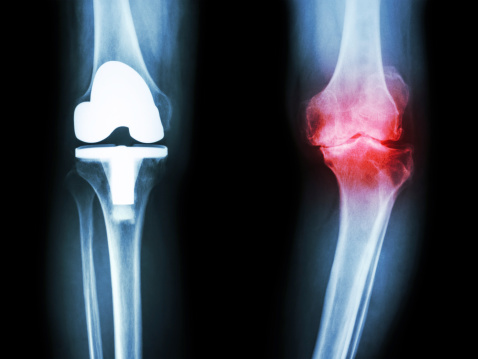 The age old saying for rheumatic fever – licks the joints but bites the heart – is now coming true for arthroplasty, commonly referred to as joint replacement surgery.

The question of whether surgical interventions to improve joint health and bone health lead to serious heart conditions was answered in a recent study by Boston-based scientists. The results of this study are in stark contrast to a recent study done on osteoarthritis patients in the UK that claimed total knee arthroplasty (TKA) or total hip arthroplasty (THA) substantially reduce the risk of serious cardiovascular events in the general population.

Osteoarthritis is a degenerative disease of the large joints, especially knees and hips. It is the most common form of arthritis and affects 27 million American adults (over the age of 25). As the cartilage of the joint deteriorates, the joint cushioning is compromised, and it finally leads to painful bone-on-bone scraping. The common symptoms of osteoarthritis are pain, stiffness, and reduced mobility of the joint. In an effort to restore mobility and reduce pain and stiffness, orthopedic surgeons resort to knee or hip replacement surgery. Every year, close to 1.8 million joint replacement surgeries are done all over the world.
The aim of the recent study by Boston University School of Medicine was to see if joint replacement surgery reduces the risk of heart attack among osteoarthritis patients, as claimed by the UK study.

The results of the analysis indicate that in the arthroplasty group, 306 patients developed myocardial infarction (MI) in the follow-up period. During the same period, 286 patients in the non-surgical group developed MI. The study also revealed that in the group that underwent the operation, the risk of heart attack was higher during the first month after the surgery and gradually declined over time.

According to Yuqing Zhang, D.Sc., Professor of Medicine and Epidemiology at Boston University School of Medicine, the findings of the study provide ample evidence that osteoarthritis patients who have THA or TKA surgery are at increased risk of heart attack in the immediate postoperative period. However, the risk drops significantly after the first month or so, and the long-term risk of heart attack is not very significant. Zhang, who is also the lead researcher of the study, does mention that, although the risk of heart attack decreases with time, the risk of blood clots in the lung remained for many years after knee replacement surgery or hip replacement surgery.