Home » Health News » Do This One Thing to Protect Your Brain 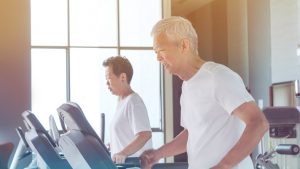 It is known that exercise is a beneficial habit when it comes to supporting and improving your health. The latest study on exercise explored exercise and its benefits to the brain. The research comes from a Massachusetts General Hospital (MGH) team that found that exercise could “clean up” areas of the brain to allow for new nerve cells to survive, which can improve cognition among Alzheimer’s disease patients.

Senior author of the paper Rudolph Tanz explained, “In our study, we showed that exercise is one of the best ways to turn on neurogenesis and then, by figuring out the molecular and genetic events involved, we determined how to mimic the beneficial effects of exercise through gene therapy and pharmacological agents.”

Lead author Se Hoon Choi added, “While we do not yet have the means for safely achieving the same effects in patients, we determined the precise protein and gene targets for developing ways to do so in the future.”

How Much Exercise Is Needed to Improve Brain Power?

An alternative study found that senior’s looking to boost their brain power need to exercise 52 hours over a six-month period. And the type of exercise doesn’t need to be intense or strenuous – it can be as easy as going for a walk. The key to achieving benefits to the brain with exercise is the duration of time, not the activity itself.
To achieve their findings, the researchers conducted a meta-analysis of existing studies. They specifically looked at randomized controlled trials where seniors exercised for at least four weeks and had their memory and reasoning skills assessed compared to a control group.

The researchers concluded that at least 52 hours of exercise over a six-month period can help improve the processing speed of the brain, which was seem among those deemed healthy and those with mild cognitive impairment. Healthy individuals also experienced an improvement of executive function, which is the brain’s ability to set and achieve goals, plan ahead, and come up with strategies.

Those who only exercised 36 hours in the six-month period did not experience the same benefits.

The study did not find any benefit between the amount of exercise and memory improvements.

Overall, both studies show the importance of exercise regarding promoting brain health, so regular exercise should become a staple in your healthy living plan. As mentioned, intensity of exercise does not matter, but more so the duration. So maybe start with a walking habit with some friends and slowly integrate other activities into your daily life.