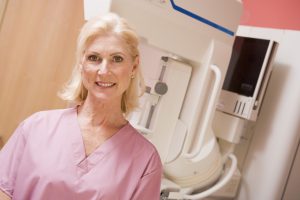 A new study suggests that mammogram benefits can extend to women in their 90s. Some women feel as they get older, they don’t need to have mammograms as they may be too old for breast cancer screenings. This is not always the case as the latest findings suggest that women of all ages still very much benefit from breast cancer screening.

In 2009, the U.S. Preventive Services Task Force stated there was insufficient evidence to assess the balance of mammogram benefits and harms in women over 75.

A study led by Dr. Cindy Lee analyzed the information about mammograms and patients from 39 states. Nearly four breast cancer cases were found in every 1,000 patients screened.
Dr. Lee explained, “We are finding more cancers with increasing age. We are doing better at catching them, [and] we have decreased the recall rate. We are calling back fewer women for additional testing, but are finding more cancers.”

The researchers concluded that there is no clear cut-off point for women to stop getting screened for breast cancer.

Robert Smith, vice president of screening for the American Cancer Society, added, “Breast cancer incidence and mortality increase as women age, and roughly 30 percent of breast cancer deaths each year occur in women who were diagnosed after the age of 70. Many of these deaths are avoidable, as Lee and colleagues demonstrate in this new report, since mammography screening performs increasingly well as women get older. While incidence is high, the disease is slower growing and density is lower, providing improved opportunity for early detection.”

“Their [the researchers’] conclusion that these data provide no support for a particular age to stop screening is consistent with the American Cancer Society breast cancer screening guideline, which states that the decision to continue screening should be based on individual patient values, [coexisting] conditions, overall health status, and estimated longevity,” Smith concluded.