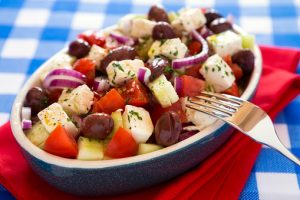 Older adults who stick to Mediterranean diet show less cerebral atrophy (brain volume loss). However, contrary to previous studies, the researchers did not find that eating more fish and less red meat was associated with changes in the brain.

The Mediterranean diet is based on large intake of fruits and vegetables, olive oil, beans, cereal grains, moderate intake of fish, dairy, and wine, and a limited intake of red meat and poultry.

Study author Michelle Luciano explained, “As we age, the brain shrinks and we lose brain cells which can affect learning and memory. This study adds to the body of evidence that suggests the Mediterranean diet has a positive impact on brain health.”

The researchers studied the eating habits of 967 Scottish people around the age of 70 without dementia. Of the group, 562 underwent MRI scans to measure brain volume, grey matter, and thickness of the cortex. From that group, 401 returned to undergo a follow-up MRI at the age of 76. The measurements were then compared to the participants’ adherence to the Mediterranean diet.

Those who did not adhere to the Mediterranean diet had great brain volume loss over the course of three years, compared to those who followed the diet more closely. No association was found between grey matter volume or thickness of the cortex and adherence to the Mediterranean diet.
Luciano concluded, “It’s possible that other components of the Mediterranean diet are responsible for this relationship, or that it’s due to all of the components in combination. In our study, eating habits were measured before brain volume was, which suggests that the diet may be able to provide long-term protection to the brain. Still, larger studies are needed to confirm these results.”