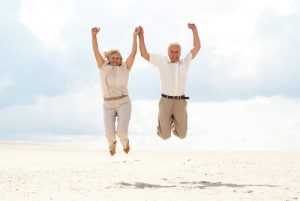 This may be a familiar story: A man in his 70s has taken blood pressure medication since he was 50 because of high blood pressure and the associated risk of heart disease.

At 50, the man was also told to change his diet, cut down on the salt and saturated fat, and make sure to get regular exercise.

For the most part, he followed his doctor’s orders, but thought his odds of living to a ripe old age were pretty slim. After all, cardiovascular disease is the top killer across the board.

Now he is still on blood pressure medication, but he’s in good health for someone in his 70s and no longer worried about a heart attack. Like many of us, we’re more conscious of our health, reading food labels in the grocery store, keeping up to date on health news and trying to adopt good lifestyle habits.

In fact, we’re living longer than ever before, and death rates for heart disease and cancer, especially, are on the decline.

So for someone 65, the CDC estimates that men have about 18 years of life left and women about 20.5 years.

These are the longest life expectancy numbers the U.S. has ever seen. And women, as seen in prior years, are continuing to live longer than men.

RELATED READING: You are definitely at risk of heart disease if…

It was through the cross-referencing of these results that researchers were able to link the life expectancy increase to declines in many major causes of death. For example, decreases in cases of heart disease and cancer have made for a better picture of life expectancy overall.

Deadly diseases on the decline

This report is good news for people who have histories of diseases like cancer and heart disease. The CDC report showed that death rates for heart disease and stroke, especially, dropped by 1.8 percent and 2.6 percent respectively.

Today, heart disease and stroke remain the first and third leading causes of death among men and women. So a drop in the numbers for two deadly diseases can be considered a positive step forward in terms of prevention and treatment.

Together, these two are among the most widespread health problems, making up more than one-third (or 34 percent) of all U.S. deaths. In 2007, 150,000 of all Americans who died of such cardiovascular diseases were younger than 65.

RELATED READING: How this new skin patch detects illness before it hits you

Why health care costs are staggering

With nearly four million people reporting disability from heart disease and stroke, it’s no surprise that those conditions are the leading causes of disability in the country. The costs are staggering, too.

In 2010, the total cost of heart disease in the U.S. was an estimated $444 billion dollars. That’s because treatment of these conditions accounts for roughly $1 for every $6 spent on health care. The economic impact of cardiovascular diseases on the country’s health-care system will become even greater as the U.S. population gets older.

And even though the CDC pointed out that death rates for heart disease and stroke have decreased in recent decades, the rates for incidence and death continue to be high among some populations, like certain ethnic groups including African-Americans, people with low socioeconomic status and, for unknown reasons, people living in the southeastern U.S.

Are you going to live longer? Here’s how

If you are the type of person that holds long life in high regard, then this information should give you hope that you have many good years to come.

While the idea of a Fountain of Youth is pretty fanciful, you could put your best bets on a few proven lifestyle adjustments to stay healthy: Make sure you watch what you eat, don’t smoke, get outdoors for a bit of physical activity, drink alcohol only in moderation and focus on being kind to your body.

This way, you’ll get the most out of your golden years!