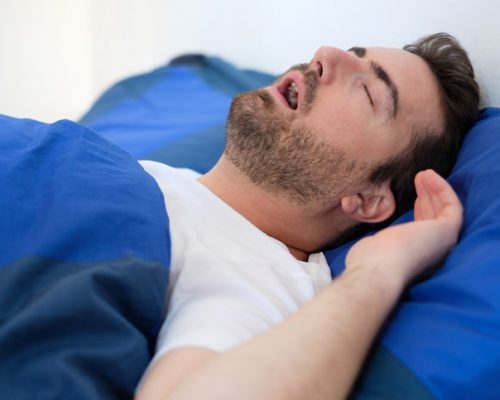 Obstructive sleep apnea is a sleep disorder that causes the sufferer to experience a loss of breath for short periods while asleep. Many times, the condition can go undiagnosed simply because the person is unaware that they have it, as it occurs during sleep. This is especially true for people who sleep alone and who live alone.

Those who are at the highest risk of developing the condition are generally overweight, male, older, have a larger neck circumference, and have unusual jaw anatomy. The condition has previously been associated with issues in the cardiovascular system and brain due to the continued lack of oxygen.

A new study sought to determine if sleep apnea is also an independent risk factor for coronary heart disease, type 2 diabetes, and diabetic kidney disease. The researchers engaged a group of 36,963 participants. The study had a follow-up period of 25 years. This is the largest study of its kind to date. The researchers used nationwide health registries to gather information on prospective cases of sleep apnea.

The results of the study showed that obstructive sleep apnea is indeed an independent risk factor for coronary heart disease, type 2 diabetes, and diabetic kidney disease. They found the risk was high in women, which was surprising due to the history of research indicating the male gender as a risk factor for sleep apnea. The researchers believe this may offer further information about the sex differences in relation to sleep apnea.

The risk of coronary heart disease was increased for patients with obstructive sleep apnea whether they were diabetic or not. Sleep apnea significantly increased the risk for diabetic patients to develop diabetic kidney disease, when compared to the diabetic patients without sleep apnea. The risk was increased as much as 75 percent in those with the sleep disorder. The researchers also noted that obstructive sleep apnea patients experienced a higher risk of developing type 2 diabetes, independent of whether they were overweight. Those with sleep apnea and type 2 diabetes had a higher risk of all-cause mortality than the general population.

“An important advantage of our large sample size was that we could investigate gender differences in the CHD and T2D risk associated with OSA,” conclude the researchers. “While we did not observe a significantly higher risk in women than in men, our data opposite to previous studies clearly show that the severe outcome of OSA is as severe in women as in men (if not more severe). It is a possible explanation for this finding may be delayed diagnosis of OSA in women compared with men.”

The researchers emphasize the importance of these results in how patients with type 2 diabetes are observed. They caution medical practitioners to examine type 2 diabetes patients for signs of obstructive sleep apnea, particularly if their diabetes progressed very quickly. There may be treatment options to slow the progression of their diabetes if this comorbidity is identified promptly.