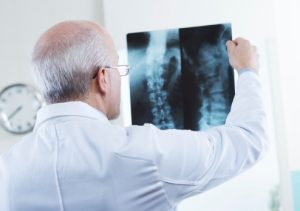 Called transcutaneous stimulation, this strategy delivers an electrical current to the spinal cord via electrodes placed on the skin of the lower back.

This is the first time that the stimulation was delivered non-invasively. In a previous study, four men with complete motor paralysis were able to generate some voluntary movements while receiving electrical stimulation to their spinal cords. But the stimulation came from a device called an epidural stimulator that was surgically implanted on the surface of the men’s spinal cords.

On the heels of that success, the lead researcher began developing a strategy for delivering stimulation to the spinal cord non-invasively, believing it could greatly expand the number of paralyzed individuals who could potentially benefit from spinal stimulation

Between that study and the current study, the number of people who’ve achieved voluntary movement while receiving spinal stimulation is nine.

While the aim of both the studies was to develop a therapy for individuals with spinal cord injury, the current study has the added bonus of giving the benefit to wide range of individuals. In the study, the men’s legs were suspended in braces that hung from the ceiling, so they could move freely without resistance. While any movement achieved in this environment is not comparable to walking, it signals significant progress.

The team of researchers in the current study was led by V. Reggie Edgerton, professor of integrative biology and physiology at UCLA, and Yury Gerasimenko, director of the laboratory of movement physiology at Pavlov. Thanks to the transcutaneous approach, more individuals can benefit from spinal stimulation. There are many patients with spinal cord injury who have already gone through many surgeries and some of them might not be up to or capable of going through another. Another advantage is that transcutaneous stimulation will cost about one-tenth the cost of an implanted stimulator.

According to Roderic Pettigrew, director of the National Institute of Biomedical Imaging and Bioengineering at NIH, the positive results increase the possibility of offering a life-changing therapy to patients without requiring surgery.

They results of the study which is funded by National Institutes of Health (NIH) is reported the Journal of Neurotrauma.