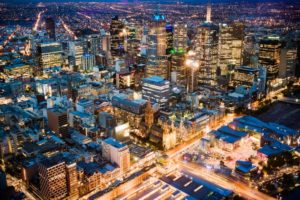 Light pollution is a term most of us have heard, but what does it really mean and why are its effects important to understand? In short, light pollution is excessive exposure to artificial light. It is what causes us discomfort when faced with too many brightly lit screens or signs, such as in Times Square. It is also what causes “urban glow” or the light reflecting from inhabited areas onto the night sky, lightening it.

Light pollution reduces our ability to enjoy the beauty of the night sky in populated areas and can disrupt our body’s natural ability to rise and rest with the sun. According to new research, though, light pollution may also be having detrimental effects on our health.

Researchers for the study gathered data on 52,027 adult participants, aged 60 or older, collected through the National Health Insurance Service-National Sample Cohort for over 10 years. Any participants with known sleep disorders were excluded from the study.

Information on exposure to light pollution was obtained from the National Centers for Environmental Information. The researchers compared the information on light exposure to the rates at which participants used two different hypnotic drugs to help them sleep.

In total, approximately 22 percent of the participants were prescribed hypnotic drugs. The researchers found that increased exposure to light pollution, particularly at night, was linked to an increased intake of hypnotic medications and an increased dosage of them.

These results were most prevalent in older adults, who were more likely to take hypnotic drugs on a daily basis and at a higher dosage when exposed to more light pollution.

“This study observed a significant association between the intensity of outdoor, artificial, nighttime lighting and the prevalence of insomnia as indicated by hypnotic agent prescriptions for older adults in South Korea,” said one of the study authors, Kyoung-bok Min. “Our results are supportive data that outdoor, artificial, nighttime light could be linked to sleep deprivation among those while inside the house.”

“Given the recent scientific evidence, including our results, bright outdoor lighting may be a novel risk factor for prescribing hypnotic drugs,” said Min. According to the researchers, policy makers need to become educated on the adverse effects of light pollution so legislation can be put into place to minimize them on current and future populations.

Future studies are still needed to help define light pollution and discover how to decrease its adverse effects on human sleep patterns and overall health.