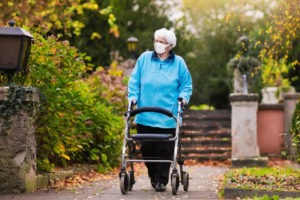 If you’re 60+ and want to boost your brain, here’s a tip: move more. A new study has found that aerobic exercise plays an instrumental role in reducing brain age.

Activities like walking, dancing, swimming, and more can improve older adult’s thinking and memory, even if they’ve spent a long time sitting on the couch.

The study, published in the journal Neurology, followed 206 adults with an average age of 66. At the time of the study, participants had no existing heart or memory problems. After being prescribed three supervised exercise sessions per week, and two at home, executive function and verbal fluency were assessed.

Over the six-month study period, workouts progressed from 20-40 minutes in length and notable improvements in brain health were observed. Verbal fluency, which is how quickly a person can retrieve information, improved by about five years.

In other words, if you were 60, verbal fluency was re-wound to levels common for a 55-year-old.

The reasoning is that aerobic exercise promotes enhanced blood flow. When more blood is flowing through the brain, particularly in areas associated with executive function and memory, these systems can improve.

This has the potential to improve memory, focus, comprehension, decision-making, and a host of other functions related to brain health. It may even delay or prevent dementia or Alzheimer’s, as previous studies have suggested.

What’s great about this study is that it showed benefits in people who aren’t typically active. This means that virtually anybody can take advantage of the benefits of progressive exercise (progressive refers to adding more over time).

By including exercise into your week, you may be able to keep your brain and memory healthier for longer and fight off some of the natural effects of brain aging.