Home » Health News » New Study: A Healthy Diet Isn’t about Just What You Eat. When You Eat Matters Too 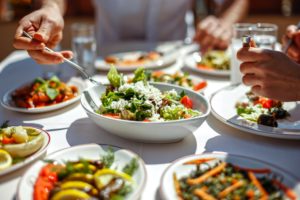 There’s no doubt that diet advice typically focuses on what you should and shouldn’t eat. But new research is echoing previous studies on another essential aspect of a healthy diet: meal timing.

Although intermittent fasting (IF) is enjoying some time in the sun for its potential effects on weight loss and overall health, the importance of meal timing might go a little bit further. A recent study published in the journal Cell is showing that meal times can play a significant role in circadian rhythm.

Circadian rhythm is the body’s 24-clock. It’s ticking in every single cell in the body and affects every daily rhythm including the sleep/wake cycle, hormone release, and even how your body reacts to medication. It primarily regulates your regular biological and physiological schedule. And according to your circadian rhythm, night time is for resting, not eating.

The study found that insulin, which releases when you eat, helps to regulate these rhythms. But if food is consumed during hours that don’t match up to the body’s natural rhythm, problems can arise.

Researchers found that when given insulin at night, mice experienced disruptions to the normal circadian rhythm. There became less of a distinction between night and day and biological processes became confused.

This may help to explain why shift workers have higher rates of obesity, cardiovascular disease, and metabolic conditions. Put simply, their circadian rhythm is out of whack because it’s being sent the wrong signals at the wrong time, potentially contributing to a series of negative health outcomes.

It should be noted that this study is not conclusive and that tests on humans need to be carried out. So far, tests on humans have shown mixed results when it comes to the effects of night eating. That said, consuming the majority of your calories during daylight hours may have some health benefits.