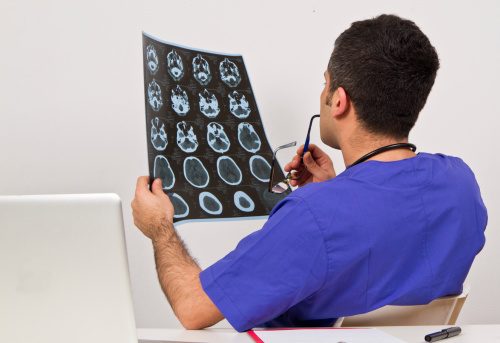 Just like how every person has a brain, every brain cell has its own brain – a ball of chromosomes wrapped in a protective fatty membrane. This is the nucleus, also known as the command station of the cell. In a recent study, partially funded by the National Institutes of Health (NIH), scientists have shown that when molecules pass through the nucleus of an astrocyte (a star-shaped brain cell), they could set off a certain activity in motion that plays a part in health and disease.

Prior studies established that astrocytes produce larger amounts of p75 neurotrophin receptor (p75NTR) – one of a family of protein growth factors that stimulate nerve cells to survive and differentiate – after a brain injury occurs.

Some disorders of the brain, including Alzheimer’s disease and brain injury, are associated with higher than normal brain levels of the growth factor TGF-beta. The high levels of TGF-beta react with the astrocytes and change their shapes, making them secrete proteins that alter brain cell activity.

In this study, the researchers discovered that by treating astrocytes with TGF-beta, they could free up a small piece of the p75NTR protein. The free p75NTR binds to nucleoporins – a group of proteins which regulates the passage of molecules in and out of the nucleus. According to the researchers, the binding facilitates the flow of certain critical molecules into the nucleus. It also helps the astrocytes enter a state where they are more reactive.

The scientists observed the astrocyte nucleus in action using high-resolution microscopes. When the scientists treated astrocytes with TGF-beta, they saw p75NTR proteins bind to nucleoporins and open the pores of the astrocytes. This helped the transport of a protein called Smad2, which plays a huge role in TGF-beta exerting its effects on astrocytes, into the nucleus.

The easiest way to explain the relationship between astrocytes and the protein is to think of the pores as gatekeepers and p75NTR as the key to unlocking a particular gate. During the current study, the team exposed particular roles for both the gatekeeper and the key and will continue to study how the nuclear pore complex controls nerve cell development and disease.

In a reverse experiment, to confirm the role of p75NTR, the scientists eliminated p75NTR from the astrocytes. As expected this move blocked the transport of Smad2 into the nucleus.

Working with the senior author of the study, Katerina Akassoglou, Ph.D., a lab showed that by eliminating the p75NTR gene in mice genetically engineered to have astrocytes that produce higher levels of TGF-beta, they could prevent hydrocephalus. Hydrocephalus is a disorder that fills the brain with excess cerebral spinal fluid.

By eliminating the p75NTR gene in mice, the scientists found they were also able to avoid post-injury scars from developing in the astrocytes. And even repair gamma oscillations, the patterns of nerve cell activity associated with learning and memory.

Inadvertently, Akassoglou and the team identified a concealed pathway that actually helps to understand how astrocytes control the processes of the brain and how they respond to injury. Akassoglou, who is a senior investigator at the Gladstone Institute for Neurological Disease, and a professor of neurology at the University of California, San Francisco, adds that the pathway they found could be common to several brain diseases, so they are excited to follow it and learn more about that area of the brain.

According to Jill Morris, Ph.D., program director at the NIH’s National Institute of Neurological Disorders and Stroke (NINDS), this research brings to light the significance of the brain’s nuclear pore complex and increases the likelihood of continued studies in the future that will target it as a way to treat an extensive array of brain disorders.

Details of the study are published in the journal Nature Neuroscience.