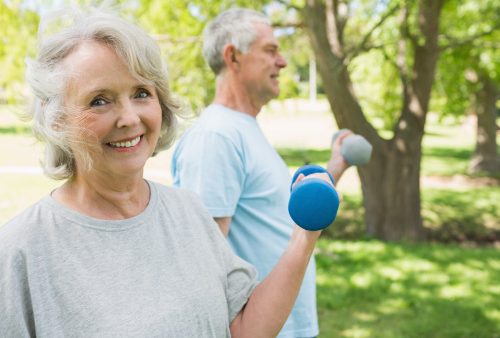 It’s been beaten over our heads—if you want to live a long healthy life, you must eat right and exercise. While this is news to absolutely no one, people still seek alternative methods to feeling healthy and losing weight, often with unsatisfactory outcomes. Even though the science has long since proven that regular exercise can boost the immune system, improve sleep, and even increase lifespan, people are still unconvinced and supposedly put off by anything that requires too much effort. A new study has found a correlation between physical activity and the reduction of cellular aging—a literal fountain of youth.

A study conducted by researchers at the Mayo Clinic in Rochester, MN and the University of Oregon set out to uncover how exercise can slow the aging of your cells. The study was composed of 36 men and 36 women and split into two age groups: young (age 18–30) and old (age 65–80). These groups were then further split into three exercise groups: high-intensity interval biking, strength training with weights, and a combination of the two.
They assessed each exercise group by taking a biopsy of the participant’s thigh muscle and comparing the molecular makeup to a control group made up of sedentary participants. They also documented insulin sensitivity and lean muscle mass. What they discovered is that high-intensity interval training had a substantial effect at the cellular level, especially when looking at mitochondria—commonly referred to as the powerhouse of the cell. As we age, the energy generation capacity of mitochondria slowly decreases, leading to increased feelings of fatigue and a lack of endurance in our later years.

They found that exercise encourages cells to make more copies of the genes that code for mitochondrial proteins responsible for muscle growth. Younger participants of the interval training group were found to have a 49 percent increase in mitochondrial capacity, but perhaps more impressive is that the older group was found to have a 69 percent increase, with high-intensity biking showing the best results at effectively reversing the age-related decline of mitochondrial function.
As we age, the function of the various muscles in the human body progressively decline. In this study, it was shown that on a cellular level, exercise can restore or minimize the deterioration of ribosomes and mitochondria in muscle cells, and the possibility is strong that this may translate to other tissue.

According to Dr. Nair, the study’s senior author, “If people have to pick one exercise, I would recommend high-intensity interval training, but think it would be more beneficial if they could do 3–4 days of interval training and then a couple of days of strength training.”

Dr. Nair and his team plan to extend their study into the cellular benefits of exercise on other tissue types, with the hopes of potentially targeting pathways that may reduce the effect of aging. They hope that, in the future, these pathways could be artificially triggered. However, exercise is currently the only proven method to prevent or delay aging.

Related: Aging process may be reversed by high-intensity aerobic exercise

The four best exercises for adults over 40