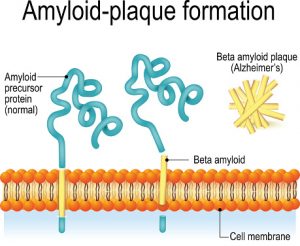 The most common neurodegenerative disease and source of dementia is Alzheimer’s disease. The condition is often associated with clumps of protein called beta amyloid that aggregate in the brain, leading to symptoms of memory loss and other cognitive deficits. These clumps are created due to misfolded proteins that have lost the elaborate shape that dictates their function. New research suggests that changes in proteins associated with aging are directly implicated in the protein formations found in Alzheimer’s.

The study in question led the researchers to investigate whether beta amyloid aggregates closely associated with Alzheimer’s disease could be induced by aging seeds—proteins that clump together with age to form aggregates. The thinking was that a phenomenon called cross-seeding would occur whereby different protein aggregates would induce each other’s aggregation. This event is known to occur between disease-associated proteins. The study involved experiments on C. elegans—an ideal organism to test on because of its limited number of cells and relative complexity. This showed that age-dependent protein aggregates of older C. elegans specimens were particularly likely to cross-seed beta amyloid protein aggregates. These results were further verified in mouse brain extracts of varying ages in vitro.
When counting the proteins from the C. elegans experiment via mass spectrometry, other proteins were identified to be of importance. Researchers found that cross-seeding activity proteins were present as minor components in disease associated aggregates, seen to aggregate increasingly after middle-age. Additionally, the researchers identified a protein seen to be aggregation-prone, called PAR-5, which induced beta-amyloid toxicity in vivo. The combination of overexpressed PAR-5 with overexpressed beta amyloid proteins was seen to accelerate beta-amyloid toxicity in C. elegans, according to paralysis rates.

While this study was done in vitro—outside of a living organism, it is not possible to make a concrete conclusion based on the current evidence observed, as the human brain is too complex to assess for all neurobiological interactions. However, the study predicts that changes in protein conformation associated with old age may initiate Alzheimer’s disease through beta-amyloid aggregation and toxicity. The researchers stress that more studies would be needed in living subject to better study whether aging seeds would be more prone to seed or associated with specific disease types in specific anatomical areas.