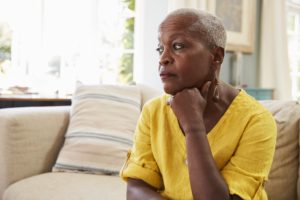 Alzheimer’s is a significant health concern for aging Americans, but perhaps more so for women than men. Women represent over 60 percent of people living with Alzheimer’s and have a one-in-six chance of developing it. By comparison, the chance for men is nearly half that at one-in-eleven.

Some new findings may shed light on why women have an elevated risk.

In mid-July, a team from Vanderbilt University presented some interesting findings at the Alzheimer’s Association International Conference in Los Angeles. Using data from positron emission tomography (PET) scans of healthy people and those diagnosed with mild cognitive impairment (MCI)—a precursor to Alzheimer’s—they were able to get an idea of how tau proteins spread.

Tau proteins are highly associated with Alzheimer’s and believed to be a cause of the disease. Research indicates that they move through the brain from neuron to neuron, like an infection, turning other proteins to tangles that ultimately kill brain cells.

Researchers found that varying brain structures between the genders may be the reason why women are more susceptible. The scans revealed that women have more “bridging” regions that connect various areas of the brain. This may let tau spread and accumulate more easily, thereby boosting Alzheimer’s risk. These findings need verification and further research, but they could help both our understanding of Alzheimer’s and new treatment methods.

There are a couple of lifestyle factors that may help slow down the development of Alzheimer’s symptoms. Research has shown that walking each day can significantly slow the progression of MCI. Anti-inflammatory diets, like those high in plant-based foods and healthy fats like the Mediterranean diet, may also help promote better mental health and brain function.