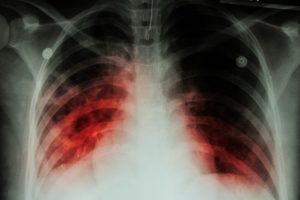 German and Swiss medical engineers collaborated with their counterparts at the University of Exeter to develop a new clinical imaging method. This new diagnostic technique would help doctors detect the spores of the fungus, Aspergillus fumigatus, sooner and more effectively and help reduce the risk of death in patients with weakened immune systems. Currently, this infection causes an estimated 200,000 deaths globally, each year.

Aspergillus fumigatus spores are tiny spores that are present everywhere in the air and breathed in by humans on a daily basis. People with healthy immune systems are not adversely affected by the spores as the spores get destroyed before they can grow and infect the body. But in patients with a weakened immune system, the fungus faces little resistance.

Once the spores enter the body, the fungus settles into the lungs and spreads from there, causing invasive pulmonary aspergillosis. In immunocompromised patients, invasive pulmonary aspergillosis is one of the most common causes of death. The best way to prevent death is to detect the spores early on and subject them to targeted treatment, but till recently this was not possible as there were no fast and reliable method of diagnosis.


Thankfully, delayed diagnosis will soon be a thing of the past. A team of medical engineers led by Professor Christopher Thornton, Associate Professor of Fungal Immunology at the University of Exeter, and Director of ISCA Diagnostics, have collaborated with scientists from the Tübingen University and University Hospitals, Universitätsklinikum Essen, Paul Scherrer Institute, to develop a novel diagnostic process. They tested their innovative diagnostic methodology in a disease model.

The latest findings of their work can be got from the leading American scientific journal – Proceedings of the National Academy of Sciences.

The novel approach involves tagging radioactively labeled antibodies to the infecting structures formed by the growing fungus. This helps make the fungus visible to doctors. The scientists used a combination of MRI and PET imaging to identify the spores and to rule out other bacterial and viral lung infections. This is a much better, and faster way of detecting the spores than the current method which involves taking tissue samples or fluid samples from the lungs of immunocompromised patients with abnormal symptoms.

According to Professor Thornton, the process the team developed is currently being adapted for humans, which means that, in future, patients could avoid the unpleasant, time-consuming, and sometimes dangerous procedures, currently in practice. And doctors can detect the spores early on and gain valuable time for successful treatment.

This is the first use of this state-of-the-art technology in fungal disease diagnosis and the team is cautiously optimistic that their innovation will help save the lives of more patients.

The collaborative work of these scientists is a wonderful example of trans-European interdisciplinary cooperation from research teams across Europe. This new technology has the scope to bring about a paradigm shift in medical practice around the world and will help pave the way for better diagnosis of other potentially fatal diseases.