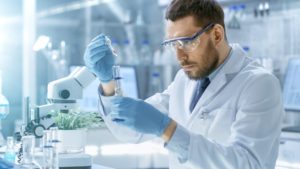 Researchers have used a new tool to identify two genes that could contribute to osteoporosis, a bone disease that increases the risk of fractures. The new findings could lend way to improved treatments. It is important to note that identifying gene variants does not necessarily reveal the cause of osteoporosis, but does reveal specific genes that may increase the risk.

The method to uncover the genes involved 3D geography of the DNA in bone-forming cells. The researchers suggest their method may also benefit other diseases as well.

Co-senior author Struan F. A. Grant explained, “The geography of the genome is not linear. Because DNA is folded into chromosomes, parts of the genome may come into physical contact, enabling key biological interactions that affect how a gene is expressed. That’s why we study the three-dimensional structure of the genome.”

In osteoporosis, bones gradually become thinner, causing them to become weaker and more prone to fractures and breaks. When we are young, the removal of old bone and the formation of new bone is a constant process. But as we age, old bone lingers longer, and it takes much longer for new bones to be formed.

The new process of 3D mapping is able to obtain more specific information compared to other genome studies. The researchers used a spatial genomics technique, which can identify genome-wide interactions between genes that were previously identified and the rest of the genome.

The researchers identified two genes that have a potential causative role in osteoporosis. They confirmed that these genes play a role in osteoblast forming new bones.

By studying these genes further, we could reveal potential new treatment methods for osteoporosis.

Until more research can be conducted, it’s essential that you work towards reducing your risk of osteoporosis by partaking in weight-bearing exercises, ensuring you’re getting adequate calcium and vitamin D, and reducing your caffeine intake.