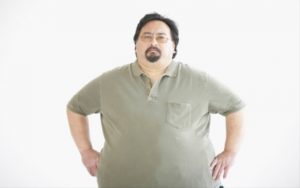 Obesity has become an international medical pandemic. Along with the incredible weight gain, obese people are far more susceptible to developing serious medical conditions. One such condition is nonalcoholic fatty liver disease, which is estimated to affect 64 million people in the United States alone. These numbers are expected to rise, as nearly one-third of adults in the U.S. are obese, and these numbers are increasing daily.

There are currently no treatment options for nonalcoholic fatty liver disease, aside from weight loss. A severe form of the condition, called nonalcoholic steatohepatitis (NASH), can cause liver inflammation and cell damage. This can result in scarring, cirrhosis, and cancer in the liver.

A new experimental drug developed at the University of Rochester Medical Center was able to reverse the effects of non-alcoholic fatty liver disease in mice. The drug is called URMC-099. It was administered to mice who had been fed a diet intended to mimic Western fast food culture. The diet was high in fats, sugars, and cholesterol’s.


High-fat diets cause the immune system to attack the liver

Consuming a diet like the one often viewed in Western societies and the one that was fed to the experiment mice, high in sugars and fats, can cause inflammation in the liver. The body automatically views this as a threat and sends immune cells to the liver to deal with the “illness.” This immune response can become overwhelming and out of control, causing even further inflammation to the area and damaging the liver.

The new experimental drug that was created and tested on the mice reduced this immune response to an acceptable level. This allowed the liver to return to its normal state and function.

The drug was tested on the mice after they had been on a high-fat and sugar diet for five and a half weeks. The diet continued for a total of six weeks. Half of the mice received the URMC-099 drug and half received placebos. “The mice given the drug had less immune-related inflammation and less liver injury and fibrosis compared to placebo-treated mice and didn’t experience any major side effects.”

Because the drug was tolerated so well in mice, the research team hopes to move the drug into human trials in the near future. Further testing and research will be needed before this can occur, but the results of the animal trials were so promising that it’s likely they will succeed in reaching the human trial stage of the drug approval process.

NAFLD may be an independent risk factor for atherosclerosis and heart disease: Study