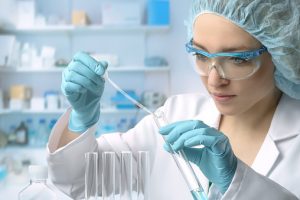 Cancer is characterized by abnormal cells in the body that divide uncontrollably and have the ability to infiltrate and destroy normal body tissue. It is estimated that about 171 per 100,000 men and women will die from cancer every year, and it is considered the second leading cause of death in the U.S. Researchers estimate that approximately 39.6 percent of men and women will be diagnosed with cancer at some point in their lives. While treatment does exist to help fight off these cellular abnormalities, they often come at a price, severely incapacitating the body and opening the potential for more opportunistic infections to occur. However, new research in the field of cancer study has uncovered new therapy in the form of a tumor vaccine that may shrink cancer, limiting the amount of side effects.

Researchers at the University of Cincinnati have created a vaccine that promotes that production of cancer-fighting immune cells in animal models. This was the effort of many years of research and development whereby cancer stem cells were engineered to express a pro-inflammatory process called interleukin-15 (IL-15) and its receptor (IL-15Ralpha). These proteins increase the production of immune cells previously mentioned, called T cells, which could lead to new immunotherapy treatments for cancer with improved side effects, according to the researchers.

The researchers go on to say that T cells and natural killer cells of the body are greatly stimulated by IL-15 and that they recognize and attack tumor cells. This pro-inflammatory protein was initially used in previous studies for the treatment of cancers such as melanoma and kidney cancer but caused a number of intolerable side effects in patients. So, the researchers found a way to transfer genes from IL-15 with its receptor into cancer cells, thereby increasing the tumor’s cell surface presentation of IL-15 to T cells. In animal models, this stopped the tumor cells from reproducing with little evidence of side effects.
“In an effort to enhance antitumor activity and reduce side effects, we studied a vaccine targeting cancer stem cells, the cells in a tumor thought to be resistant that give rise to recurrent tumors after treatment, by genetically altering them to express IL-15 and IL-15Ralpha to see if lung cancers implanted in animal models shrunk. Animal lung cancer stem cells expressing IL-15 and IL-15Ralpha stimulated proliferation of T cells suggesting the ability to enhance immune responses.

These findings further support evidence of IL-15’s ability as a cancer treatment. We are continuing vaccination studies in animal models with hopes of moving this research to a Phase I trial in humans to see if side effects are reduced,” said John Morris, MD, co-author of this study and clinical co-leader of the Molecular Therapeutics and Diagnosis Program for the Cincinnati Cancer Consortium