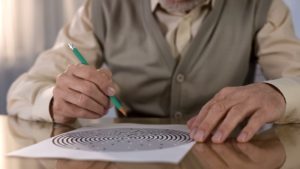 In mid-October, a biotechnology company called Biogen claimed it has produced a drug that can slow down cognitive decline and the onset of Alzheimer’s. The product still needs to undergo FDA approval and is unlikely to be available—if it is approved—for at least two years.

That’s pretty cool news. Unfortunately, news of new drugs isn’t always good news. The reason why is that it might eliminate the incentive to live a lifestyle that promotes holistic health. For example, there are number of techniques that might help boost memory, slow cognitive decline, and delay the onset of Alzheimer’s and dementia in addition to offering a number of other health benefits.

To avoid waiting around for some medicine that might work, and only do one thing, try these multi-dimensional way to encourage a healthy mind:

Eat Your Fruits and Veggies: Both the Mediterranean and DASH diets have been linked to stronger cognition and delayed cognitive decline. These diets, which are low in refined carbohydrate and saturated fat, promote a healthy heart and lower blood pressure, which may translate into a greater volume of oxygen-rich blood being pumped to the brain. These styles of eating are also associated lower levels of inflammation, which might also contribute to improved brain health.

Get Out and Talk To People: There is evidence to suggest that social isolation can cause Alzheimer’s to develop more quickly. Studies have shown that limited interaction with others can significantly boost the speed of cognitive decline compared to those who socialize more often. Getting out and talking to people, joining a social club or chatting with neighbors can help your brain make new connections to stimulate activity.

Get Out And…Do Something: There is a sizeable pile of research to show that exercise and slower cognitive decline are closely related. Exercise can even help people that already have Alzheimer’s, so its benefit cannot be understated. Find ways to include some exercise, like swimming, cycling, or walking, into your day and you’ll be doing your brain and body good.

So here’s an idea: pick up the phone and call a friend or acquaintance and see if they want to get together for lunch. Walk to the restaurant, and when you sit down order a salmon salad. Do that, or something similar, a few times a week and you’ll be doing plenty to maintain memory and promote a healthy brain.