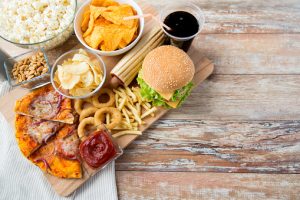 An estimated 400,000 people in the U.S. and about 2.5 million people around the world suffer from a potentially disabling disease of the brain and central nervous system called multiple sclerosis (MS).  There is currently no cure for MS, with treatment being focused on speeding up recovery from attacks and slowing down the progression of the disease.

A new study has found that eating a fatty diet can increase the risk of MS relapse in children while a healthy one rich in vegetables could cut the risk down by as much as half.

MS occurs due to the destruction of the protective covering around nerve fibers or axons, called myelin sheaths. This leads to communication problems between the brain and the rest of the body, causing MS symptoms. Permanent damage to these nerves is an eventuality.

Autoimmune disorders such as MS result from innate immune cells attacking healthy tissue. The myelin covering nerve fibers can be compared to the protective coating found on electrical wires. If it were to get damaged, the electricity would not reach its destination. When the protective myelin is damaged and the never fiber is exposed, the message that was traveling from the brain along the nerve may be slowed or blocked.

Multiple sclerosis is thought to develop in people due to a combination of genetics and environmental factors. Signs and symptoms of the disease may differ greatly from person to person depending on the location of the affected nerve fibers. The following are some of these symptoms:

Looking at the eating habits of MS patients

The study in question involved 219 young MS patients who filled out questionnaires about food. All were diagnosed with the relapsing-remitting form of multiple sclerosis—patients have attacks that are symptom-free for a period of time. Or, they had clinically isolated syndrome, where the first episode occurred before their 18th birthday.

Dietary data and health statuses were monitored for nearly two years on average. During this time, about 43 percent suffered a relapse of their disease.

On the flip side, however, every additional cup of vegetables was linked with a 50 percent reduction in relapse risk, regardless of how much fat the children ate.

The researchers believe that excess fat intake may be triggering the release of inflammatory chemicals and affecting the composition of gut bacteria. Animal-based diets are also more likely to be associated with chronic inflammatory conditions, as opposed to vegetable-rich diets, which are associated with the opposite.

While the researchers do admit that no causal relationship can be reached by this study and that more research is needed, it definitely shows that diet can have an important role in MS management.