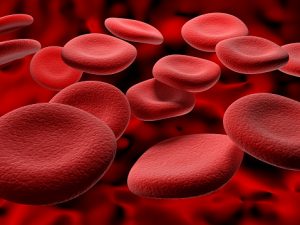 In multiple sclerosis (MS) patients, brain shrinkage is associated with hemoglobin leakage from the damaged red blood cells. The researchers found that treatments that lower hemoglobin levels actually slowed down MS disease progression. Hemoglobin is a protein in red blood cells that carries iron and oxygen around the body.

The study involved 140 participants with advanced multiple sclerosis. Lead author of the study Prof. Charles Bangham explained, “These are exciting but early results. If further studies confirm them, they may suggest new avenues of treatment, and hopefully more options to offer patients in the future.”

Nearly 65 percent of MS patients go on to develop a more serious form of the disease, which is known as secondary progressive multiple sclerosis. This phase usually onsets 15 years after initial diagnosis and is characterized by progressively worsening symptoms with no periods of improvement.

This secondary phase also leads to the death of brain cells. The brain shrinks on average 0.3 percent annually in progressive MS patients.

Previous studies uncovered high levels of iron around blood vessels in the brain – which is toxic and hence may be the reason for the death of brain cells in MS. In the new study, the researchers suggest that hemoglobin may be responsible for high iron levels in the brain.

Normally, once hemoglobin is released from the broken-down red blood cells, it cannot enter the brain as it is unable to cross the blood-brain barrier. The problem is, in MS patients this barrier is weakened by the disease, so it lets the protein pass through. Once in, hemoglobin is broken down by an enzyme that is abundant in the MS-affected brains. The iron is released into the brain as a result of this hemoglobin breakdown.

Prof. Bangham explained, “The iron escapes from the hemoglobin, and may then result in the cell damage and brain shrinkage we see in secondary progressive MS.”

The study does not suggest that removing iron from one’s diet will improve this condition. In fact, as researchers explained, iron derived from food does not affect the levels of iron in the brain. Essential for healthy functioning of the body, iron intake should not be eliminated or reduced. Rather, it is the hemoglobin levels that should be tackled.

Prof. Bangham said, “We were amazed by the results, and we were surprised by the size of the apparent effect of hemoglobin on brain shrinkage. Over a number of years, it could significantly impact a patient’s symptoms.”
Although high levels of hemoglobin in the brain is not the only factor contributing to brain shrinkage, it may be the most significant. “It may be more effective to look at ways of removing excess hemoglobin from the blood, rather than iron. There are number of drugs that do this, although none have been used for multiple sclerosis,” suggests Prof. Bangham.

Regularly checking the patient’s blood would not be effective either. Rather, a brain scan would clearly demonstrate brain shrinkage.

The researchers are working on additional studies to confirm their findings and explore possible treatment to address the problem.