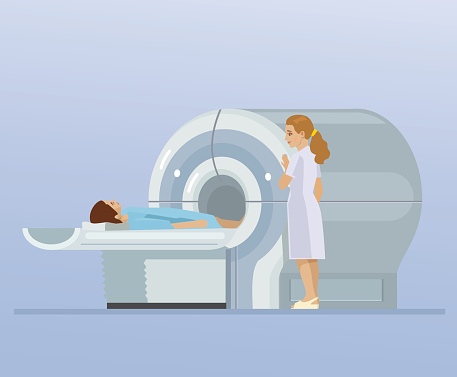 In most diagnostic testing cases, in order to get the most accurate result, a biopsy much be taken and analyzed. This also tends to be the case with liver pathology, but according to a new study from Linköping University in Sweden, taking a tissue sample from the liver to diagnose fatty liver can be replaced in most cases by a painless magnetic resonance investigation (MRI).

The liver has a multitude of various functions, including detoxification of various metabolites, protein synthesis, and the production of biochemicals necessary for digestion. It is also involved in the storage of fat. This often leads to a reversible condition called fatty liver, which is commonly associated with excess alcohol consumption. Another condition, however, that also leads to fatty liver but is associated more with being overweight than with alcohol is a condition called NAFLD—non-alcoholic fatty liver disease.

Most people with fatty liver will not experience impaired liver function, as it is estimated that around 25 percent of adults in Sweden have NAFLD, and the majority don’t even realize they have it. It is often an incidental finding during routine doctor visits. It is important to note, however, that this condition can lead to scar tissue formation in the liver and subsequent liver cirrhosis: a serious medical condition.

Standard methods for diagnosing such liver conditions included taking a biopsy tissue sample to assess the amount of fat present in the liver. This procedure can cause discomfort and a small risk of bleeding to the patient, so a less invasive diagnostic testing method would be preferred.

This is what the Swedish team set out to accomplish by determining the accuracy of magnetic resonance spectroscopy (MRS) compared to a more traditional biopsy. They are hoping that this will become the standard of testing, as magnetic resonance technology can measure the percentage of fat within the liver, even at very low percentages. Currently, the criteria for fatty liver diagnosis is at least 5 percent.
Their study consisted of 94 people who were being investigated for abnormal liver enzymes seen during lab testing of their blood.

“We know, however, that some people with a fat level in the liver lower than five percent suffer liver damage. Our study shows that everyone who had as low as three percent fat in the liver, as determined by MRS, was assessed to have a fatty liver when a tissue biopsy was examined [under] the microscope. Reducing the cut-off to three percent fat will still give us one-hundred percent accuracy in diagnosis, but we will find significantly more people who have fatty liver. They will receive an explanation for their elevated liver enzyme levels from this more gentle investigation,” says Stergios Kechagias, professor in internal medicine at the Department of Medical and Health Sciences at Linköping University Hospital.

This is a good example of how the use of modern technology can reduce, to some degree, the amount of suffering that invasive testing procedures inflict on patients, with technologies such as MRIs possibly becoming a preferred measure for making a diagnosis.