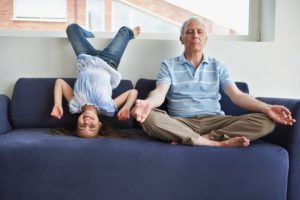 There is a common perception that as people grow older, they become more childlike. A recent study done at the Cambridge Centre for Ageing and Neuroscience (Cam-CAN) adds credence to the perception as it reveals that older people (like children) have a shorter attention span than young adults.

Age is believed to change the way we respond to stimuli and how the networks in our brain interact, but most of the studies done on eliciting these changes resort to using basic stimuli in artificial experiments.

The researchers in the current study wanted to learn how people of different ages respond to complex, life-like stimuli. To make this happen the researchers showed 218 participants, aged 18-88, a Hitchcock TV episode that was edited for the study.  While the participants were watching the video, the researchers utilized functional magnetic resonance imaging (fMRI) to gauge the activity in their brains.

The researchers were surprised to find a lot of similarity in the way the younger subjects reacted to the video– their brain activity patterns were very similar at similar points in the program.

But in the older people such a similarity was absent as their thought processes very highly individualized. This indicates the brain activity in the older subjects were not in accordance to what they were watching, most probably because they were more distracted.

To get into specifics, major differences were apparent in the superior frontal lobe and the intraparietal sulcus regions at the front of the brain, which are the main centers of focus and attention. Differences were also noted in the areas responsible for the processing of language, namely the left inferior frontal gyrus and bilateral middle temporal gyrus.

The results of the in-depth analysis suggest that the ability of a person to respond to everyday environmental stimuli changes with age. And this could be because of the altered attention patterns.

According to Dr. Karen Campbell, first author on the study, as we grow older our ability to stay focused tends to decline, and we end up responding to more ‘distracting’ information than younger adults. It is because of this that older adults end up responding to a more diverse range of stimuli. The end result is they understand and interpret everyday events quite differently from younger people.

To ensure that audience responses to movies and TV shows are as similar as possible, directors and camera professionals use different techniques to focus the audience’s attention to a particular visual or sound in each shot. However, just capturing attention will not suffice while watching a full length film; it is important to maintain the attention over long periods.

Dr. Campbell and her team feel that the variety in brain patterns displayed by older people shows a difference in their ability to focus, as attentional capture by environmental stimuli is considered to be preserved with age. This is in accordance with previous research, showing that older adults respond better to films and books with emotional content and even remember such content better than younger adults.