Home » Health News » Men over 65 sleep much better in nature 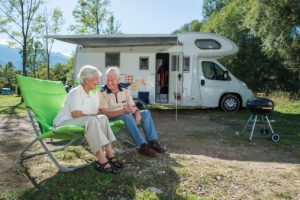 A good night’s sleep is one of the most important factors in a healthy lifestyle. Unfortunately, so many of us still end up counting sheep. A recent study discovered that for people over 65, spending time outdoors increases the ability to sleep well – especially for men.

Inadequate sleep can have short- and long-term effects. It can cause irritability, increase susceptibility to stress, reduce your cognitive function and memory skills, cause weight gain and obesity and is connected with a deterioration in overall physical and mental health.

Diana Grigsby-Toussaint, a professor of kinesiology and community health at the University of Illinois (U of I) and a faculty member in their Division of Nutritional Science, says, “It’s hard to overestimate the importance of high-quality sleep… This new study shows that exposure to a natural environment may help people get the sleep they need.”

Together with the U of I research team and a group of scientists from NYU School of Medicine, Grigsby-Toussaint found that having access to green spaces, whether it be a local park or a nearby lake, increases the capability to attain satisfactory rest.

Taking data from the Centers for Disease Control’s (CDC) Behavioral Risk Factor Surveillance System, the team had survey information from 255,171 American adults. The survey asked questions to determine the correlation between a good night’s sleep and access to nature. They also had access to a USDA index with information regarding each participant’s proximity to natural amenities, how many hours of sunlight they received (which relates to human circadian rhythm) and the local temperature.

“Interestingly,” said Grigsby-Toussaint, “individuals reporting 21 to 29 days of insufficient sleep consistently had lower odds of access to green space and natural amenities compared to those reporting less than one week.” She also noted that access to green space was much more useful as a sleep aid for men and even more powerful for those over 65.

It is suggested that access to nature leads to more physical activity, which also plays a role in the ability to sleep well. Research also shows that although men benefit more from the powers of nature, they are also reported to take advantage of the outdoors more than women – who are concerned about their safety – which could be the reason why their sleep is more positively affected.

Specifically, Grigsby-Toussaint says spending time outdoors will improve the quality of life for many people over 65. She wants the study results to encourage nursing homes and retirement communities to provide more accessible outdoor space and incentive for seniors to spend time gardening or on nature walks.

More research will have to be conducted into this area, but in the meantime, if you’re having trouble sleeping, get outside and take a walk in the woods.