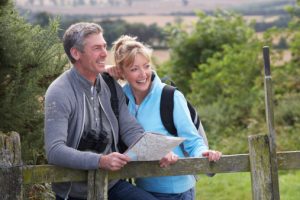 If you need to know which way to go, your best bet is to ask a man, according to new research that suggests men have a better sense of direction than women. Although men and women specialize in their own tasks, researchers wanted to uncover if a good sense of direction has more to do with sex hormones or cultural conditioning.

In order to test if culture or hormones plays a role in direction, women were given testosterone and asked to perform tasks in a virtual environment.

The researchers, from the Norwegian University of Science and Technology, conducted fMRIs and found that men used more shortcuts and different parts of the brain to complete the tasks when compared to women.

The women who received testosterone were also able to orient themselves better in the four cardinal directions. Carl Pintzka, a medical doctor and Ph.D. candidate at the university said, “Men’s sense of direction was more effective. They quite simply got to their destination faster.”

The puzzle that both the men and women had to complete involved wearing 3-D goggles and using a joystick to navigate a maze in which they had 30 seconds to complete each given task.

The results showed that the men completed 50 percent more tasks than the women, and men and women have different navigational strategies. Dr. Pintzka added, “If they’re going to the Student Society building in Trondheim, for example, men usually go in the general direction where it’s located. Women usually orient themselves along a route to get there, for example, ‘go past the hairdresser and then up the street and turn right after the store’.”

Researchers determined that using cardinal directions was more effective because it offers greater flexibility and that directions are completed faster because it depends less on where you currently are.

Although the fMRI testing showed that both men and women use large parts of their brains for directions, those parts vary between each gender. Men typically used the hippocampus more, while women tended to use their frontal areas more. Dr. Pintzka explained, “That’s in sync with the fact that the hippocampus is necessary to make use of cardinal directions. In ancient times, men were hunters and women were gatherers. Therefore, our brains probably evolved differently. For instance, other researchers have documented that women are better at finding objects locally than men. In simple terms, women are faster at finding things in the house, and men are faster at finding the house.”

A different group of women were then given testosterone under their tongue while others received a placebo. Dr. Pintzka said, “We hoped that they would be able to solve more tasks, but they didn’t. But they had improved knowledge of the layout of the maze. And they used the hippocampus to a greater extent, which tends to be used more by men for navigating.”

It has been shown that losing your sense of direction is an early sign of Alzheimer’s disease.

“Almost all brain-related diseases are different in men and women, either in the number of affected individuals or in severity. Therefore, something is likely protecting or harming people of one sex. Since we know that twice as many women as men are diagnosed with Alzheimer’s disease, there might be something related to sex hormones that is harmful,” said Dr. Pintzka.

Dr. Pintzka hopes that by understanding more about the different areas of the brain, which are used to complete different tasks, it can offer a greater understanding of Alzheimer’s disease as well.