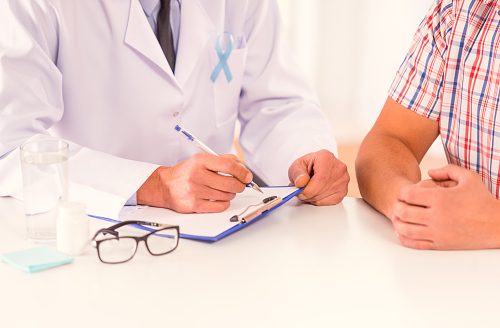 Men with enlarged prostate can decrease their nighttime urination with prostatic artery embolization (PAE) treatment. PAE is a type of radiology treatment used to help men with enlarged prostates reduce the number of times they wake up throughout the night to urinate. The researchers suggest that men reported better sleep and improved quality of life after receiving PAE.

Lead researcher Sandeep Bagla said, “Waking in the night with an urgent need to urinate, or nocturia, significantly disrupts the lives of men by preventing them from having a full night’s sleep. For many men, the cause of their discomfort is an enlarged prostate and these results show men can live a more normal life once they’ve undergone PAE to address this condition. For these individuals, PAE has the added benefit of being less invasive compared to other treatments and is performed on an outpatient basis, allowing many men to go home the same day.”

The researchers conducted their analysis on 68 men with enlarged prostates who underwent PAE treatments. The team examined patient-reported quality of life scores, ranging from zero to six. Patients also used a seven-question symptom index from the American Urological Association (AUA) to report the negative effects of urinary symptoms, with scores ranging from zero to 35.

A follow-up after one month of treatment was conducted on 48 of the participants. The researchers observed vast improvements in nocturnal urination, symptoms, and quality of life.

In prostatic artery embolization, a catheter is inserted into the femoral artery and guided to the prostate artery on both sides of the enlarged prostate gland. Once positioned next to the prostate, the catheter is used to deliver microscopic spheres to block blood flow, causing the prostate to shrink.

Bagla added, “Many of my patients who have undergone PAE have told me that reducing the need to go to the bathroom at night has improved their daily lives by reducing sleep deprivation, which takes a toll. They’re able to enjoy their daytime activities—including quality time spent with their family and friends and hobbies. They have even noticed increased work productivity. Anecdotally, patients who show signs of a better quality of life three months after the treatment appear to continue their progress two or three years after undergoing PAE.”

Although the study found a decrease in nighttime urination, it does not suggest that PAE can eliminate the problem completely. Patients may still have to undergo additional treatments to further alleviate their nocturnal urination.


Prostate artery embolization as a treatment option for enlarged prostate

Giorgio Ivan Russo, presenter of the research, added, “Prostate artery embolization is a feasible and minimally invasive technique.” Dr. Russo did add that PAE may not be for everyone as it is associated with persistent symptoms.

Although no major complications from the treatment were reported, there were a few minor ones. “At the short-term follow-up, the results were very good. One-third of patients failed to have adequate symptom improvement and had chosen some other form of treatment by 12 months, but two-thirds of the patients did very well.”

Both studies show “that prostate artery embolization is effective, in terms of both subjective and objective outcomes, as a treatment option in benign prostatic hyperplasia. Moreover, the excellent safety profile of the procedure is confirmed.

However, data comparing embolization with transurethral resection of the prostate, which is still the surgical gold standard in the treatment of benign hyperplasia, is still lacking and highly warranted.” added Dominik Abt from Cantonal Hospital St. Gallen in Switzerland.