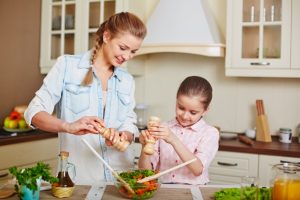 A new study shows that there is still a large number of children consuming high amounts of salt. Although the effects of salt may not be instant in younger children, excess salt could set them up for health problems later on.

The study found that nearly 90 percent of American children are consuming higher levels than the recommended salt recommendation.

Sodium can be found in bread, pizza, cold cuts, processed snacks and soups, among other foods.

Lead author of the study Zerleen Quader explained, “We already know that nearly all Americans regardless of age, race, and gender consume more sodium than is recommended for a healthy diet, and the excess intake is of great concern among particular youths.”

The highest salt intake was seen among 14- to 18-year-olds. Girls consumed less salt than boys did.

Dinner accounted for 39 percent of salt intake, followed by lunch with 31 percent, and breakfast at 15 percent.

Quader added, “With the exception of plain milk, which naturally contains sodium, the top 10 food categories contributing to U.S. school children’s sodium intake in 2011-2012 comprised foods in which sodium is added during processing or preparation.”

Salt is a known contributor to high blood pressure, and one in nine children have been found to have elevated blood pressure as a result of excess sodium.

Quader concluded, “Sodium reduction is considered a key public health strategy to reduce the risk of cardiovascular diseases nationwide, and this study is the latest in ongoing CDC efforts to monitor U.S. sodium intake.”

An easy way to reduce salt is to read food labels. Low salt content is considered to be 140 mg or less.

Look for these items on a food label to boost health