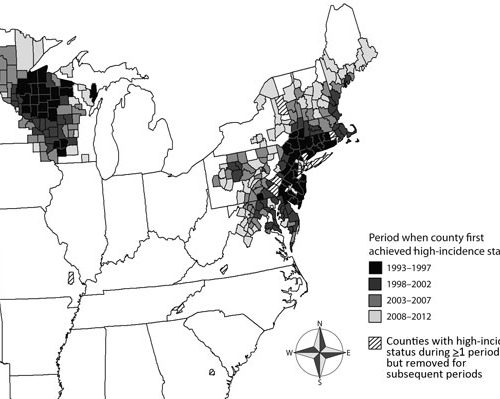 The number of Lyme disease cases is on the rise in the U.S. according to a study using data spanning two decades by the Centers for Disease Control and Prevention (CDC).

In each of these four periods, most of the counties that met the high incidence criteria fell into three major areas – northeastern, mid-Atlantic and north-central United States.

Over the two decades, the number of counties identified as having high incidence of Lyme disease in the northeastern states increased 320 percent.

In its conclusion, the CDC said it was interesting to note that four counties in the southeastern United States had high incidence of Lyme disease but reported cases decreased. The CDC said this could be due to improved diagnostic facilities and the fact that clinicians were better able to distinguish Lyme disease from another tick-associated illness.

Lyme disease is a tick-borne infection caused by the tick Borrelia burgdorferi.

According to the CDC, the symptoms of Lyme disease can be classified into three stages.

In the early localized stage, an infected person will notice a red expanding rash (see picture). 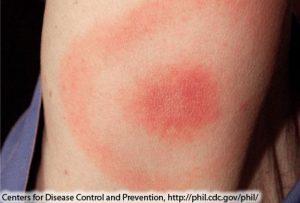 The rash usually feels warm to the touch but is rarely itchy or painful. Along with the rash the person will experience fatigue, chills, fever, headache, muscle and joint aches, and swollen lymph nodes. Some people might not get a rash.

If untreated the early localized stage progresses to the early disseminated stage where the infection may spread from the site of the bite to other parts of the body. This produces different symptoms like facial palsy (paralysis of one side of the face), additional rashes on other areas of the body, pain and swelling in the large joints, and even heart palpitations.

In the late disseminated stage, Lyme disease will progress to arthritis where large joints, particularly knees, are most often affected. In addition to arthritis, some people may develop neurological complaints a few months – even years – after the initial infection. The symptoms include shooting pains, numbness, or tingling in the hands or feet, and problems with short-term memory.

Given the serious nature of the complications, the CDC urges people to who live in an area known for Lyme disease or who have been bitten by a tick to seek medical attention immediately on noticing any of the above symptoms.
Sources:
http://wwwnc.cdc.gov/eid/article/21/8/14-1878_article
http://www.cdc.gov/lyme/signs_symptoms/