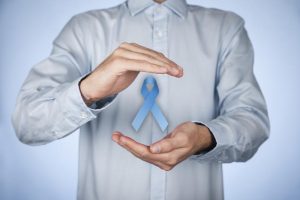 With Father’s Day just around the corner, it’s important that we discuss issues dealing with men’s health, including the number one male health issue – prostate cancer. The week leading up to Father’s Day is designated as Men’s Health Week, so discussions about prostate and prostate cancer are generally more common around this time.

Prostate cancer occurs when cells in the prostate – a gland surrounding the neck of the bladder – grows abnormally and develops cancer. If left completely untreated, prostate cancer cells may eventually spread from the prostate, resulting in tumors in other parts of the body, particularly in the bones and lymph nodes.

What could be most troubling is, prostate cancer develops often without any warning. Many times, men don’t have symptoms at first, and when they do develop, the progression is slow. These can include urinary issues like slow urine flow and low frequency, blood in the urine or semen, reduced ability to get an erection, and painful ejaculation.

Who has the highest prostate cancer risk?

Prostate cancer is a men’s cancer, and an aggressive one. But aside from this, older men are much more likely to be diagnosed with the disease.

There is a hereditary component, too. If someone has a father or brother who developed prostate cancer before 60, they are twice as likely to develop it themselves. An unhealthy diet and a lack of exercise are contributing factors to the disease as well.

Why do you need to take your prostate health seriously? Statistics are sobering: 50 percent of men over 60 will develop an enlarged prostate, according to the Mayo Clinic. After age 85, this number jumps to a staggering 95 percent.

Diet is a key prevention tactic. One of the best foods for prostate is pomegranate juice from the vibrant red pulp and seeds of the pomegranate fruit.

A study presented at the American Urological Association (AUA) meeting found that drinking eight ounces of pomegranate juice a day could help slow the progression of prostate cancer.

Participants in the study included 48 men who had increasing “prostate-specific antigen” (or PSA) levels after their prostate cancer surgery. At the start of the study in 2003, participants had an average PSA doubling time (the shorter the time the more aggressive the cancer) of 15.4 months. Three years later, researchers reported that the men who drank one eight-ounce glass of pomegranate juice daily had saw a slower progression of prostate cancer than those who didn’t.

Researchers continued to follow the men in the study for progress. They noted that 15 of the men stuck with the glass of pomegranate juice a day recommendation. The AUA reports that the PSA doubling times of the men who kept drinking pomegranate juice were about four times longer than at the start of the study and, of course, much longer than in the men who didn’t drink the juice at all.

If you decide to start drinking pomegranate juice, don’t drink more than a glass a day. It is high in calories, with almost double the calorie count per glass than orange juice

Radiotherapy, on the other hand, involves the use of numerous types of X-rays to treat cancer with exposure to radiation.

Hormone therapy, also known as androgen-deprivation therapy (or ADT), is also engineered to stop the release of testosterone in order to prevent it from acting on prostate cells. Hormone therapy is increasingly used before, during, or after local treatment. It has long played a vital role in men with advancing prostate cancer.

Finally, chemotherapy involves the administration of drugs through the bloodstream. This is meant to destroy cancer cells that have spread from the prostate gland all the way to other parts of the body. There are many chemotherapies, and different combinations of the therapies outlined here.
Of course, there’s no proven strategy to prevent prostate cancer altogether. Particular treatments, too, are not without their own side effects.

But you can significantly reduce the risk of prostate cancer by taking some real interest in your health and bringing awareness of the disease to the men closest to you.

Prostate cancer, one of the most common types of cancer in men, is often treated with radiotherapy, however, experts now believe that this form of treatment can lead to secondary cancers. Continue reading…

Prostatitis (prostate inflammation) causes painful urination, and urinary tract infections (UTIs) increase the risk of developing the condition. Prostatitis can be referred to as an infection of the prostate, but inflammation often occurs without a known infection. Continue reading…