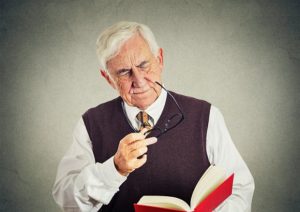 Our ability to see is something we should all cherish. Seeing the beauty of a sunset or the smile of your newly born grandchild can help create memories that last a lifetime. Unfortunately, as with all things in life, our eyes gradually begin to deteriorate, being encumbered by a decreased visual field, floaters, or even complete vision loss. And then there’s macular degeneration, a form of irreversible vision loss in people over the age of 60 that develops with age. It is never a cause of total blindness, but it can be a source of significant visual disability. A new study has found that switching to a low glycemic diet could potentially put a stop to this disease altogether.

Age-related macular degeneration occurs when the small central portion of the retina, called the macula, begins to deteriorate or decline in its ability to sense light. There are two forms of this condition:

Dry Form: Characterized by the presence of yellow deposits called drusen in the macular. These deposits do not cause changes in vision but instead grow in size and number, leading to dimming or distorted vision. This form of macular degeneration is most notable when the patient is reading. The patient may also have blind spots in the center of their vision or lose central vision altogether in advanced stages.

Wet form: This type is characterized by the formation of abnormal blood vessels from the choroid underneath the macula. These newly formed blood vessels can leak blood and fluid into the retina, leading to distortion of vision. The condition can make straight lines appear wavy and produce blind spots in central vision. In advanced cases, abnormal blood vessel bleeding can form a scar, leading to permanent loss of central vision.

Researchers at the Jean Mayer USDA Human Nutrition Research Center on Aging at Tufts University have used mouse studies to see if adopting a low-glycemic diet, which consists of foods that slowly release blood into the blood stream, can help predict the occurrence of age-related macular degeneration, as the condition is often diagnosed only when vision loss has already begun.
The study in question involved 59 randomized mice that were divided into two groups: 19 low-glycemic fed mice, and 40 high-glycemic fed mice, with the diets only differing in carbohydrate sources. The types of carbohydrates used were 100 percent amylopectin for one group—considered a high glycemic starch—and 30 percent amylopectin and 70 percent amylose—a low glycemic starch—for the other group.

After six months of study, the researchers noticed that those on the high-glycemic diet developed age-related macular degeneration, which included the loss of function of cells at the back of the eye called retinal pigmented epithelial atrophy (RPE) and of the cells that capture light, called photoreceptors, both precursors to dry macular degeneration. These symptoms were not seen in the low-glycemic mouse group, but more amazingly, when the high-glycemic mouse group was switched to a low-glycemic diet mid-experiment, the damage to the retina appeared to be arrested.

“We were genuinely surprised that the retinas from mice whose diets were switched from high- to low-glycemic index diets midway through the study were indistinguishable from those fed low-glycemic index diet throughout the study. We hadn’t anticipated that dietary change might repair the accumulated damage in the RPE so effectively. Our experimental results suggest that switching from a high-glycemic diet to a low-glycemic one is beneficial to eye health in people that are heading towards developing AMD,” said lead author Sheldon Rowan, Ph.D.